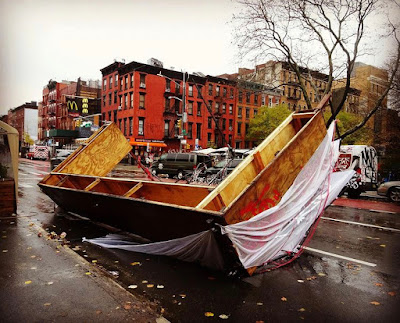 Today's high winds — reported at 40-plus mph at times during the gale warning — toppled this curbside dining setup on First Avenue between Fifth Street and Sixth Street (thanks to Jeremiah Moss for the photos!) 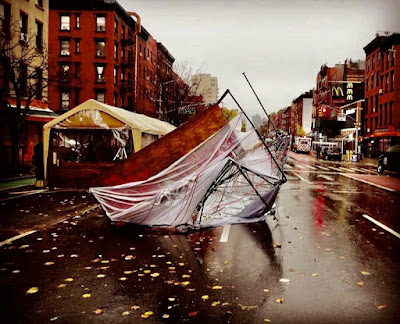 Turns out the structure belongs to Panna II, which was not open at the time. Owner Boshir Khan told Curbed that this was the third time (as Curbed noted — !) that his structure has toppled over.
Per Curbed:

[H]e hasn’t been able to install a sturdier structure because of the expense; this one, he says, cost him $2,000, and more substantial ones can cost more than ten times that figure. "If you want to do it permanently, it's a lot of money,” he says. Even though he's already looking into putting it back up, Khan says he's still unsure about how plausible outdoor dining will be once the weather turns from chilly to flat-out cold: "We have a heater and everything, and people [still] don't want to sit down." Over the past two weeks, Khan says, no diner has wanted to eat outside.

NYC restaurateurs have until Dec. 15 to fully adapt their structures to the winter, per city guidelines.
An EVG reader also reported a damaged curbside structure outside Takahachi/Drom on Avenue A near Sixth Street... 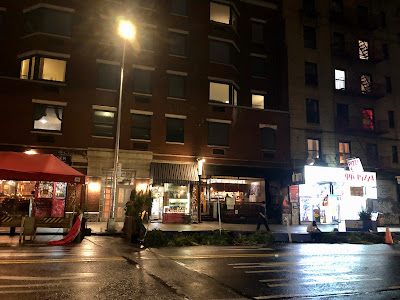 Panna II falls under the "Wishing some things weren't here that are here" of your blog. :)

This doesn't belong to Panna II, which is upstairs, but the Royal restaurant, which is on the ground floor.

I also thought it belonged to Royal Bangladesh, as they reopened before Panna II this past summer and grabbed the space... but I went with Curbed's reporting...

No matter who owns it, public safety is the issue.

Someone could have been hurt or worse by this. Imagine if this crashed into your windshield when you were driving by? These structures are not sound or safe or weatherproofed. I am dreading the day some drunk person gets burned by one of those propane heaters. You just know it's going to happen.

Sand. How expensive is SAND?

If you can't afford it, you shouldn't do it.

If there wasn't a stupid directive stating you cannot eat indoors, this wouldn't be happening. But to all those covid obsessed; enjoy your paranoia.

Federal funding. NOW and get this shit off the streets. They are dangerous, just into bike lanes, take a ton of parking(which is not only annoying for someone driving but makes people double park etc), and are a loud nuisance.