Report of a maintenance hole explosion on 1st Avenue 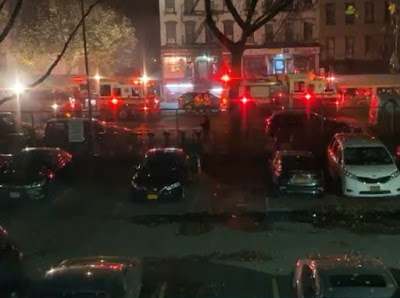 Here's an early reader report... this happened on First Avenue between Fifth Street and Sixth Street:

Last night aprox 3 a.m. there was a HUGE series of explosions rocking the entire block. What sounded like extremely loud electrical crackling was booming as a sustained series of explosions that lasted 10-15 minutes as giant clouds of acrid smoke rose from a vent in the street near the bike lane directly in front of 87-89 First Ave.
The bizarre crackling/buzzing/explosion sound had me thinking we were under attack again (9/11 flashback). Either that or some kind of "Cloverfield" situation... Multiple firehouses and emergency agencies arrived.

Con Ed and other emergency crews are on the scene this morning... no official word on what happened. According to the Citizen app, the FDNY described this as a maintenance hole explosion.
Posted by Grieve at 9:16 AM

The world's financial and media center with a glut of capital flowing everywhere - yet the infrastructure...There's an irony going on!

The infrastructure is built, controlled and "maintained" (ha ha) by the gub'ment. Don't blame us anarchists or the market.

Wow this usually happens after it snows and the streets are salted.

One block away...slept right through it.