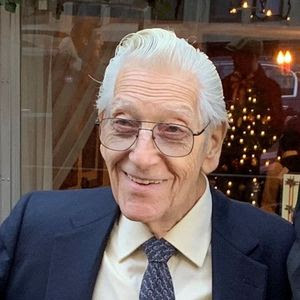 Robert J. Giurdanella, a fixture in this neighborhood where he was born and raised, died on Dec. 6. He was 89.
He helped run family businesses Giurdanella Bros. Inc. on Bond Street and Bella Tiles, whose showroom on First Avenue at 11th Street closed in 2018 after 35 years in business. The warehouse remains around the corner on 11th Street. (The family also owns these buildings, among others in the neighborhood.)
Here are some passages from a colorful online obituary:

He was one of a kind and a true legend. He wanted things His Way. "My Way" by Frank Sinatra was his song. He was tough, yet compassionate. He was arrogant, yet humble. He liked to scream to get his point across (though always denied he was yelling), but he loved to laugh and smile more.

He loved to be surrounded by family and friends and enjoyed nothing more than the holidays to visit with all our friends and have home-cooked meals. When he "helped" in the kitchen, he used no less than 4 bowls, 5 pots and pans, 20 utensils and 3 dish towels, not to mention the counter mess.

While attending elementary and high school, he worked as a carpenter with his father and uncle at Giurdanella Bros. Inc. on 12th Street in Manhattan. Most notable to him was that he constructed incubators for the Board of Health so they could study snails.

Robert loved photography and developed his own film in his own darkroom. He started Five Star Photos and was a wedding photographer for a couple of years. He also made Gold and Bronze shoes as mementos from baby shoes. When home on leave, he would hang out on 14th St & 3rd Ave with his friends.

One of my first NYC apartments was owned by the family on 11th street near the tile store. Very small place.

this guy owned a tremendous amount of real estate in the neighborhood (including some vacant lots) i wonder what that internal family battle will look like. rumors for years of what will happen when he passes.

Those were some very heartwarming memories shared in the obits. He and I have similar cooking styles! RIP, it's hard to lose family near the holidays

Wow!
He was so tough I thought he'd last forever !
So sorry to read this, very sad news.
Knew his son, sending him and his family
condolences and peace.

RIP Bobby. Such a long history in the neighborhood!