Former August Laura space is on the rental market; building on the auction block 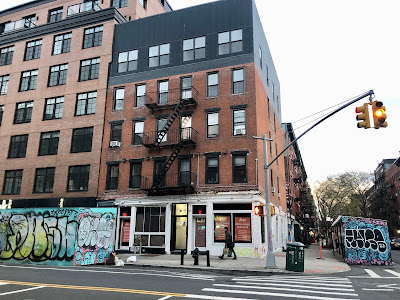 For lease signs arrived yesterday on the retail space on the NE corner of Avenue A and Sixth Street... 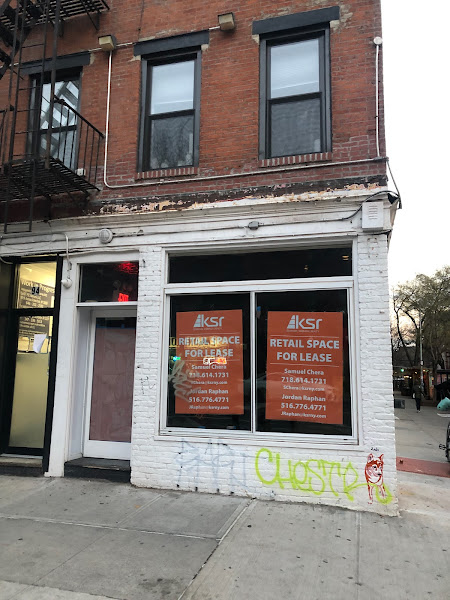 As noted last week, the bar-restaurant August Laura closed here last week.
The retail listing, which doesn't mention many particulars, such as asking rent, is right here.
Meanwhile, a separate listing here states the recently renovated building is on the auction block starting on Jan. 31. The minimum bid for 94-96 Avenue, with nine residential units and the retail space, is $4.8 million.

August Laura opened here in October 2019. They seemed to have more irregular hours over the last few months, rarely open at the advertised 4 p.m. hour. Their ample outdoor space, including sidewalk seating and streetside dining structures on Avenue A and Sixth Street, sat unused on pleasant summer and fall afternoons and early evenings.
August Laura took over the space from EV institution Sidewalk, the restaurant bar and live music venue (home of the Antifolk Festival) that closed in February 2019 after 34 years.
Pini Milstein, who retired, was the principal owner of the building and the operator of the Sidewalk. According to public records, Penn South Capital paid $9.6 million for the property in March 2019. The building's new owners added a one-floor extension here in 2020.
Posted by Grieve at 5:03 AM

Bring back sidewalk, or at least the motorcycle mural. It's still under there.

The building was purchased by a group of investors putting up various amounts of money. Then, existing tenants had to be paid off to leave. Then, apts had to be gutted and and another floor added in order to get maximum rent.

The rent for the ground floor space was more than $30k per month, still not enough for the REIT to cover the mortgage and other costs. And they never got the apts above rented out. Now they're trying to flip their failed investment.

They DESERVE to lose their shirts, not just because they are real estate parasites, but also because they destroyed the wonderful SideWalk space that served our community so well for so long.

If only Milstein had sold the building and created a long term (10+ year) lease for the SideWalk to be operated by others with the proviso that it be kept intact. But, he clearly didn't give a damn either....