Making a connection with the history of this 13th Street apartment 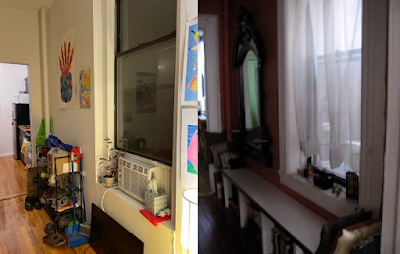 Earlier this year, Andrea Wang moved into an apartment on 13th Street between First Avenue and Second Avenue.
Curious about the space, she requested an official rent history of the apartment.
As she discovered, a former tenant is writer-editor Sari Botton, who lived in this unit from 1994-2004. Botton is the editor of "Goodbye to All That: Writers on Loving and Leaving New York," and the follow-up — "Never Can Say Goodbye: Writers on Their Unshakeable Love for New York."
Botton had written about this apartment in the first collection ("I had a lease on a marginally decrepit but livable rent-stabilized one-bedroom in a tenement on East 13th Street, for which I paid about $600 a month") as well as in The Village Voice.
Wang contacted Botton, who now lives upstate. They exchanged photos of the apartment in its past and present condition ... 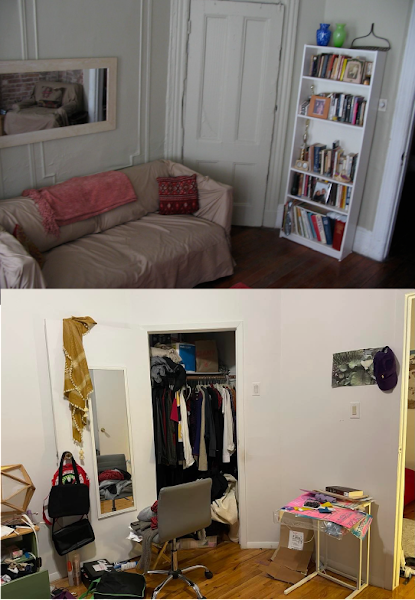 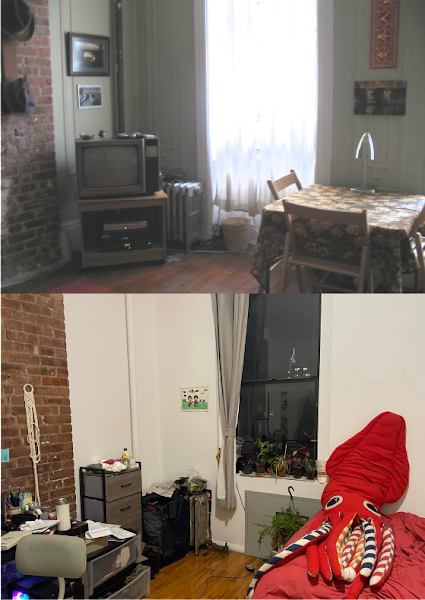 "Sari had a lot of written pieces online about her time living in New York, her apartment in New York, how she loved the city and discovered herself there," Wang told me. "I'm a newcomer to the city, and I wanted to build a connection to the history of the space I inhabited. She was in a way the perfect person to have previously lived there because her writing about her relationship to the city perfectly contextualized the connection we had, and she shared my openness and curiosity."
Earlier in the fall, Botton stopped by the apartment when she was in the city to meet Wang and her roommate Benjy... 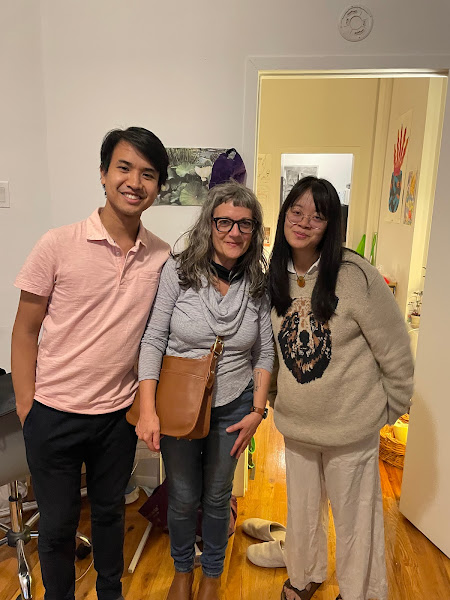 "When she visited, it was trippy to have us all be in the space together — felt like a collision of past, present and future," Wang said. "It felt meaningful that we had made memories in the same physical space but years apart. I moved around a lot as a kid and always wondered about the families that built their lives in those spaces before me."
She continued.
"It was cool when she pointed out little details about the space — shelves she had mounted that we still used, how the wall in one room had been shifted over. Apparently, she had her rent reduced one year because the bathroom ceiling caved in. She pointed out a closet in the building's hallway and said it used to be a bathroom because some of the apartments didn't have them at the time," Wang said. "Especially in a fast-paced city, our everyday interactions tend to prioritize efficiency. It was so meaningful to unearth this connection to someone who I wouldn't have met otherwise and got me wondering about the other potential shared experiences embedded in my everyday life."
Interested in your rent history? You can visit this link to learn more.
Posted by Grieve at 6:30 AM

Fascinating!
Early in my days in NYC, I met a gentleman whose family had owned the East Village building in which I lived decades before I was born. His and his brother's descriptions of the building and the neighbors were eye-opening.
A search of building records on the NYC HPD and other Websites can be quite revealing about your building's past.
Asking elderly neighbors about your building's history is also a good idea.
After moving out of the EV into a 1960s building five years ago, I learned that the previous tenant in my apartment OD'd or committed suicide in it after transitioning. My current apartment was vacant for a couple of years, so the neighbors thought it was haunted until I moved in.

I guess renovation means stripping everything of interest from the original building and raising the rent as high as possible, which is of course the very definition of gentrification.

I hope she checked to make sure that the rent was only increased by the legal amounts between then and now!

@Sara, You are so right. If half the new EV residents checked out their rent history a large portion of them would get their rent reduced due to landlords illegally getting rid of rent stabilized apartments. It takes only one email and Mr. EVG supplied the link: https://hcr.ny.gov/most-common-rent-regulation-issues-tenants
I do appreciate Andrea wanting to find out local history. It is amazing how little people who now live here know about the neighborhood. Like those who do not know what CBGBs was much less jazz musician's who have no idea how important the EV's jazz clubs like The Tin Palace or The Five Spot were. Time for a plug for The Bowery Alliance's Windows on the Bowery project.

lovely piece. thank you for sharing.

To all the rent activists in the mist:
Great story. I've done my rent history and learned a few things, though not much seems useful. Although my unit remains rent stabilized, I learned that it was really only a studio that was magically transformed in the 1990s to a one bedroom and the rent was jacked up by $500 that year without much explanation. Because I have been paying my rent without incident for decades, I was told that I could not do anything to recover any money or even seek a rent reduction. Is that true? Also, there are plenty of things wrong building wise and in the unit. I also think it lacks a CO. Any takers?

Many of the old line tenant buildings in the neighborhood lack c of o s. It was not required by the City before 1919. Even coops where a bank is mortgaging a unit is ok with a lack of c of o if it meets what i mentioned above

Marginally decrepit? Looks a heck of a lot nicer than any East Village or LES apartment I ever rented!

Sari also has a great new writing project you should check out: https://oldster.substack.com/

@noble neolani maybe you need a dictionary, because that's literally not the definition of gentrification.

"Because I have been paying my rent without incident for decades, I was told that I could not do anything to recover any money or even seek a rent reduction. Is that true?"

This is not legal advice. The state did pass a law allowing for an unlimited look-back period on rent overcharges...unfortunately, the Court of Appeals gutted that part of the law as unfairly retroactive. If in the past you overcharged for four years without being caught, you can more or less get away with it.

Thank you, Sarah. I have been wondering about this problem for years. I appreciate learning that this was something that was considered and then struck down in the Court of Appeals as too retroactive. Because of course I'm going to be severely overcharged for the rest of my tenancy no matter what because of demand. I love it here, but damn.