East River Park below Stanton Street shuts down today as the most significant work to date gets underway here on the $1.45 billion East Side Coastal Resiliency project.
According to the weekly construction bulletin, these park amenities will now be locked up to the public: the amphitheater, southern athletic fields, basketball courts, lawn and water play area, Delancey Street Bridge, Brian Watkins Tennis Center, and the dance circle.
The bulletin states that the work includes "installation of protective fences and site preparation, including clearing and grubbing." East River Park Action reported that the city will start cutting down the trees in this area south of Stanton as early as tomorrow. Under the city's resiliency plan, they'll need to remove 1,000 trees in total from East River Park.
Click on the map below for more details ... everything within the pinkish zone is closed as of today...

Also today, the construction will close the East River Greenway that runs along the FDR between Montgomery Street and 10th Street. 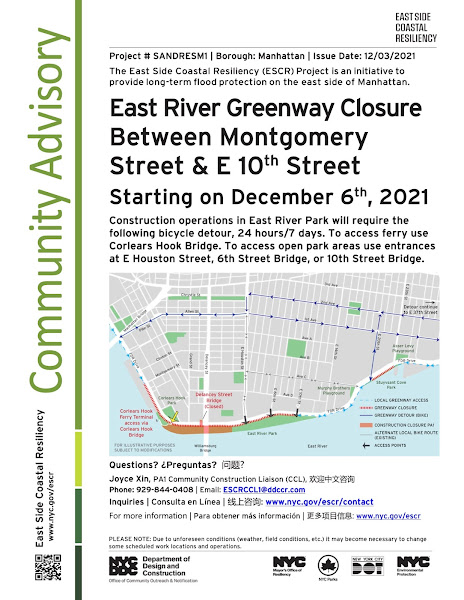 Looking at the city's advisory, it's not immediately apparent what cyclists traveling north are supposed to do upon arriving at Montgomery Street. Presumably, cyclists will have to turn on Pike at the Manhattan Bridge and head north along Allen, then to First Avenue across Houston, etc. ... Commuters need to use the Corlears Hook Bridge for public access to the ferry.
Park amenities north of Stanton Street will remain open for public use, with access at East Houston Street, Sixth Street and 10th Street. The city has said they will maintain public access to a minimum of 42 percent of the park throughout construction.
Last week, the Appellate Division lifted the Temporary Restraining Order from Nov. 2 that had been in effect to halt construction.
Work began in Project Area 1 — between Montgomery Street and East 15th Street — on Nov. 1, focusing on the Brian Watkins Tennis Center.
As previously reported, the former Compost Yard was converted into green space to make up for some of the lost park access during construction/demolition over the next four-plus years. This lawn area is expected to be open for public use by the end of 2021. (The photo below is from Saturday.) 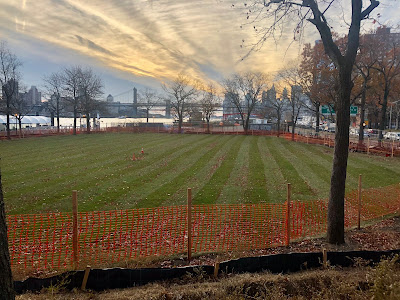 Work continues in Project Area 2 between East 15 Street and 25th Street, including Asser Levy Playground, Stuyvesant Cove Park and Murphy Brothers Playground.
Construction on the East Side is expected to wrap up by the end of 2026.
Read our previous posts for more background on the ESCR and the opposition and controversy over the city's current plan.
East River Park Action and other activists say they will continue to fight for alternatives to preserve much of the park and provide interim flood control.
Updated 11 a.m.
There are reports of police arresting activists at the scene. The @1000people1000trees account is providing updates from the park.
Updated 5 p.m.
According to Gothamist, there were three arrests today. Activists say they plan to be back at it tomorrow.
PIX11 has coverage here.
Posted by Grieve at 5:05 AM

I see a large police presence at the East River Park this morning. I guess the City is worried about protestors trying to disrupt the destruction of the park. Terrible situation.

This makes me sick to my stomach. I can't even bear the thought of going over there and seeing the trees chopped down. What a disgrace, City Council should be ashamed. None of us will live to see any new tree grow to maturity.

Glad to see a plan is moving forward.

Carlina Rivera: This is a CRIME! Where else a plan like this would go through? Only in YOUR district. This will be the end of your "political" career. Shame on you.

Ha, if anyone thinks this is the end of Carlina’s career, they obviously didn’t vote or care to help vote her out in this years general election. The turnout for voters was piss poor. None of the major media outlets could be bothered to cover this issue until after it started progressing into the construction phase. Instead we focused on scaring people into thinking we needed a cop mayor, someone who represents the most corrupt orgs in the state. Par for the course I guess with no one voting.

They don’t “need” to cut down 1000 trees, they decided to prioritize cars over trees. That is not climate resilience, it’s a total sham. The city hasn’t even finished post-Sandy upgrades to NYCHA housing 9 years after which have nothing to do with the park. This is a terrible, horrible, no good, very bad plan. One of the most beautiful places to breathe in all of the city will turn into another ugly manufactured waterfront ripe for redevelopment.

Bloomberg. This is his creation. The park was named for Mayor Lindsay who wasn’t perfect by a long shot. But he made the first Earth day celebration in NY and fought the smog before any other city. Our city is becoming exactly the cement paved Disney Bloomberg ordered.

It’s time to jump ship. This boat is sinking. There are many places better than this corporate run disgusting island. Tristan de Cuhana , Portugal, Anguilla…..

To all the folks who believe the Park closure and renovation is destroying nature should remember it was originally wetlands, everything was originally planned, and To all the folks who equally hate Robert Moses you're demonstrations are archiving his wild fantasies. I'm in full support of letting the community be heard, transparency, and having a strong community involvement, but people who want to shut this down are the real problem.

People who live here, suffered through Sandy, and demand sane flood protection that isn't an ecocide are the problem? No, politicians doing backroom deals for their big money donors is the problem.

FYI: the Greenway is closed right below the Houston St entrance to the Montgomery St entrance.

The esplanade is also closed from right below Houston St entrance to the Corlears Hook ferry terminal.