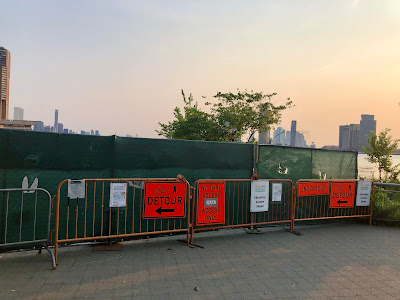 Stuyvesant Cove Park north of 20th Street is now closed as floodwall work related to the East Side Coastal Resiliency (ESCR) project continues along this corridor.
This three-block section is expected to be closed until some time in 2023 (subject to change), per the flyers... 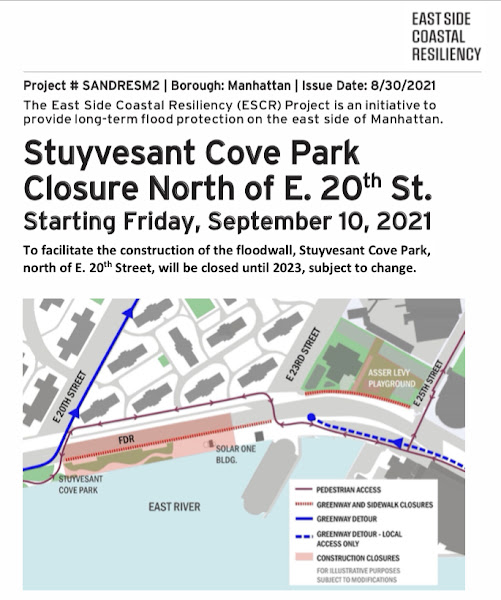 This part of this ESCR construction started at the end of 2020. This is considered Project Area 2, which encompasses work between 15th Street and 25th Street, including Asser Levy Playground, Stuyvesant Cove Park, Murphy Brothers Playground, as well as local streets around the Con Edison facility. (You can find more updates about work in this section at this link.)
As Curbed previously reported: "Stuyvesant Cove will be dismantled and replaced with an elevated berm near the FDR Drive, with a sea wall built along its bike path on the waterfront. Solar One plans to move into a newly constructed building within a much different landscape."
The work on Stuyvesant Cove Park will happen in two phases... We're apparently in Phase 2... 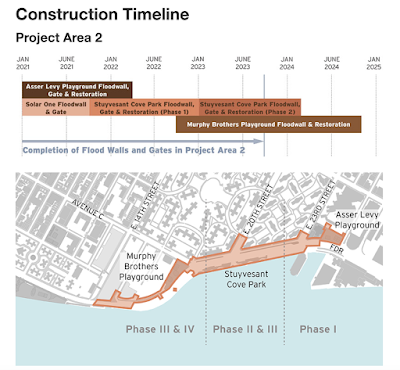 So this is Project Area 2. The part of the ESCR getting more attention here is Project Area 1 between Montgomery Street and 15th Street, including East River Park. That work is expected to begin this fall. Trees that the city will cut down have apparently already been identified. (Updated noon: Word is circulating that workers have started removing several trees.)

I am confused. This isn't part of the overall demolition of the entire park? If not, why do this now? It's all too confusing. None of this makes sense.

The worst mayor in city history easily. I hope every gym he has a membership at gets shutdown and remodeled and he can never tend to his well being ever again. *middle finger*

Try biking down along the east side now -- you are at extreme risk of getting killed at 23 Street due to this closure. And once you can get across to the other side of Avenue C (really cross at your own risk), there is absolutely no bike infrastructure, as promised, and then as further insult -- you have the vanishing bike lane mess that DoT created from 14 to Houston to deal with. Who can we blame for this complete affront to our safety?

From 311 website:
"You can submit a request for a new on-street bicycle lane, route, or car-free greenway to the Department of Transportation (DOT). DOT will respond to requests within 12 weeks of receipt."
https://portal.311.nyc.gov/article/?kanumber=KA-01260

That is sad cutting down all those nice big trees in the park especially now with the global warming situation we find ourselves in. Tragic situation.

Does anyone know where the landfill is coming from?
Is the city planning to pay a carting company for trash to elevate the park?

From ESCR Project Background
https://www1.nyc.gov/assets/escr/downloads/pdf/FEIS/ESCR-EIS-Chapter-5.7-Hazardous-Materials.pdf
"Historically, almost the entire study area was within the East River until it was filled in the 19th and 20th centuries. The source and quality of this fill material are unknown."
5.7-4
"Human exposure to contaminants from the former MGP or other sources can potentially occur through direct contact when there is an exposure pathway, e.g., when excavation is occurring... if such contaminants are not properly managed, the proposed excavation,
earthmoving, dewatering, and other construction activities can introduce potential risk to construction workers and others nearby by providing a pathway of exposure from contaminants... Demolition or disturbance of existing structures that have ACM, LBP/LCP, electrical equipment containing PCBs, or fluorescent lights or older thermostats containing mercury have the potential to release contaminants if these materials are not properly managed"
5.7-5

"Based on the types of contaminants that are typically found in New York City, some of the potential contaminants of concern are described below. The list provides a summary of potential categories of contaminants and is not a comprehensive list of all contaminants that may be encountered:
Volatile organic compounds (VOCs), Semivolatile organic compounds (SVOCs), Polychlorinated biphenyls (PCBs), Pesticides, herbicides, and rodenticides, Metals (including lead, arsenic, cadmium, chromium, mercury and cyanide, Fuel oil and gasoline from storage tanks, Fill materials of unknown origin, Asbestos, Lead-based paint (LBP) and Lead-containing Paint (LCP)"