To get Corey Johnson's attention, East River Park activists chain themselves to tree at City Hall 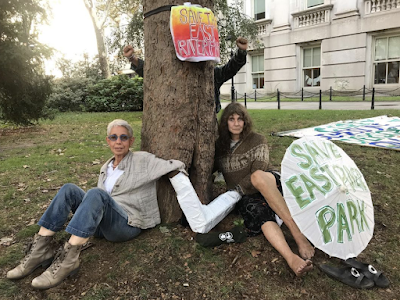 Yesterday morning, two local activists, identified as JK Canepa and Jmac, chained themselves to a tree outside City Hall to demand Council Speaker Corey Johnson allow an oversight hearing for East River Park.
Other activists from East River Park Action were also on hand during the day.
To date, Johnson has refused to hold an emergency hearing on the pending demolition of the park. He has also not provided any comments as to why.
Per Curbed yesterday afternoon:

Johnson has not yet got in touch with the group, though a representative from the mayor's office has and is mediating between his office and the demonstrators. That's not going to get anyone unlocked though. "We don't want a meeting," Canepa said. "We want an oversight hearing, and we want to hear it from Corey himself."

This fall, workers are expected to start razing the 57.5-acre park and cutting down the 1,000 mature trees, and eventually rebuilding the park atop eight feet of landfill as part of the East Side Coastal Resiliency Project.
East River Park Action other advocates say there are better ways to preserve the park and provide flood protection, such as the one mapped out in the years after Sandy. In late 2018, the city surprised community stakeholders by announcing a complete overhaul of a plan discussed over four years of local meetings.
In October 2019, the city announced that they would phase in the construction, so only portions of the park are closed to the public at any given time.
Photo via @eastriverparkaction
Posted by Grieve at 5:33 AM

Corey Johnson was too busy partying on Fire Island to care about the LES.

Why only eight feet? If you’re going to bother tearing down the entire park, future proof it, go for 20 feet.

Cory Johnson is just another Democrat hack in service to the Transnational real estate lobby. Like every politician in NYC. Howard Hughes Corp spreads it around!

The weird thing is the East River Park will be eight feet, while 98% of the res of NYC's coastline will be "unmitigated" and "unresilient." So what's the point? There is no master plan.

Yes. CJ also spent much of the summer partying in Provincetown based on a recent report in the NY Post. As a fellow gay man, I was an ardent supporter of him. He appeared to be a loud, proud and much needed voice for the LGBTQ+ community of NYC. We are only a couple of years apart. Both of us are living with HIV. We both moved to NYC within the same year as well. Lots of similarities. I am starting to lose my admiration and support of him moving forward. Instead of partying like it's 1999, especially during a pandemic, an economic collapse and a city under social duress against the failure of our ever so dorky mayor, I'd rather be fast at work, trying to elicit positive change and taking my obligations more seriously if I was appointed to city council in a role which has afforded me job security, a solid living wage, and plentiful benefits along with fame. He seems to be a man motivated by self interests. He claims to care about his districts, the city, the people at large, which could be true, but resorts to doing his own thing, getting what he wants, forgetting what he promised or promises to others, and to hell with anyone else. Is it hyperbole or grandstanding to appear interested and engaged in front of the public and the media, and then not to follow through when it pertains to actual policy and advocating for the needs of residents? This issue with East River Park is a perfect example of his ineptitude and apathy. Again, somewhere, I believe he is personally benefiting from the backing of this project. Perhaps he will re-shift his focus and become the man he was upon entering office upon re-election with his campaign, but I won't hold my breath. I am disappointed. He isn't opposed to this whatsoever. But why would he? He doesn't live anywhere near the river like the rest of us and is blithely unaffected. Thanks Corey for nothing.

Agreed, time and time again one of the biggest questions about this plan has been avoided:

How does raising the park by the East River protect the other 2/3rds of the Manhattan that is exposed?

This is the biggest clue that this project is a developer handout just for the sake of it.

Another useless elected official just collecting his paycheck while waiting to be remaindered at the end of the year. Seriously, why do we keep getting the political dregs?!?

I was a longtime supporter of Johnson until he failed to do anything regarding defunding the NYPD and redistributing those funds to education during the last budget vote. Since then, he's done absolutely nothing for the community beyond sending out newsletters. I'm extremely disappointed in him and his current silence on this issue speaks volumes. He's given up on the job and just doesn't care.

"he's done absolutely nothing for the community beyond sending out newsletters"

hey that's the Carlina template too!

I am so disappointed in Corey Johnson and Carlina Rivera in regards to the East River park fiasco and the outdoor dining that has taken over the East Village. They are not on our side. I feel duped by both of them.

Unfortunately the East Side Coastal Resiliency Project is a done deal it is going to happen, too much money and power players in this City involved who are supporting it for it to be cancelled now. What a shame cutting down all those trees to make a huge messy construction site that will exist for years. It is a total betrayal of the people of the LES/EV.

I came here to say exactly this. They are both total bums.

Anonymous said...
"he's done absolutely nothing for the community beyond sending out newsletters"

hey that's the Carlina template too!