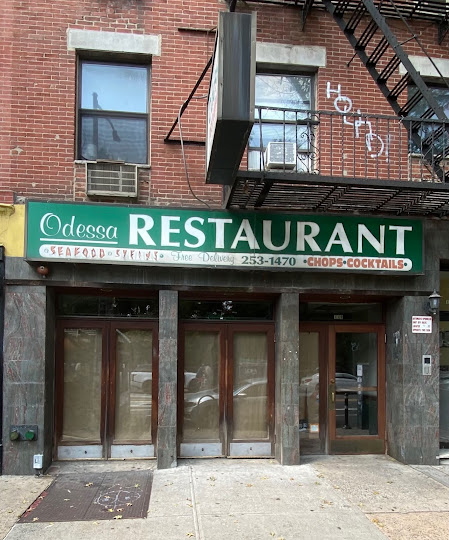 Photo by Steven
Former Odessa Watchers™ noted the arrival yesterday of brown paper on the front windows at the old diner at 119 Avenue A.
As you may know, Superiority Burger has signed a lease for the address here between Seventh Street and St. Mark's Place, first reported by Grub Street last month.
Brooks Headley, the owner of the all-vegetarian quick-serve spot on Ninth Street, told Grub Street's Rob Patronite and Robin Raisfeld that he's not changing a thing:

"Odessa has always kinda been my dream space," he says. What's so dreamy about it is that besides being big, it comes completely furnished and ready to go. "It's not old and dusty and gross and needing upgrades," he says. "I find it completely beautiful — the soda counter, the satellite bar, the cash register station. I don't plan to change it at all."

So the paper on the windows is likely to provide a little privacy and keep the Former Odessa Watchers™from obsessing over every little detail. (Sample: That pen was not on the table yesterday. Also, we forgot to report that the Sanity Inspection Grade, an A, and assorted signage were removed from the front windows several weeks ago. Hopefully, all this is in the Diner Hall of Fame.)
Headley previously said that the move from Ninth Street will be several months down the road. (Given the current supply-chain issues, it may take longer for any new kitchen equipment to arrive.)
Once the new home of Superiority Burger is up and running, they'll first launch a dinner service before opening it up later for lunch and breakfast.
In July 2020, longtime manager Dennis Vassilatos said that Odessa was shutting down after a prolonged slump in business due to the pandemic. (Odessa Restaurant opened in this space in April 1995. The original Odessa, the longtime favorite that dated to the mid-1960s, closed next door in August 2013.)
However, closer to the last day, co-owner Steve Helios told Gothamist that Odessa was only closing temporarily, that the space would be renovated. The building's landlord is Odessa partner Mike Skulikidis. The closing turned out to be more than temporary.
Superiority Burger opened in the East Village in June 2015.
Posted by Grieve at 5:00 AM

I like Superiority Burger and I appreciate their plan not to gut the place, but I have to agree with the previous commenter... it makes me die inside to see anything but our beloved Odessa here.

Ugh so no more eggs, I also die inside over this. And they better not hire wait staff with obnoxious attitude. The new owners have a lot to live up to, and no you don’t automatically get Odessa customers if it sucks. We can all still go to Veselka

I'm very sorry that the real Odessa no longer exists, but that can hardly be blamed on vegetarians/vegans. Some of this anger seems misplaced.

If former Odessa customers choose to take their business elsewhere once Superiority moves in, that's too bad, but vegans will surely make up for the loss, because the world does not exactly embrace us and we could always use another place to eat.

I'm glad nice people are moving in. Toward the end Odessas attitude changed dramatically from nice to totally nasty.

Dudes, you need to calm the fuck down. Odessa as a space would have been absolutely been wiped away from our neighborhood if not for this. Im so sorry eggs and ham wont be offered in this space any longer, oh shit, thats right, it was already offering nothing! Support good fucking people like brooks, he's doing everything he can for this neighborhood. Its not his fault cheap diner rent has been priced out

Superiority Burger isn’t self-righteous. More importantly, their food is ridiculously good. I’m an omnivore and could happily eat it 3x a week, or more. You’re really missing out if you won’t even try it.