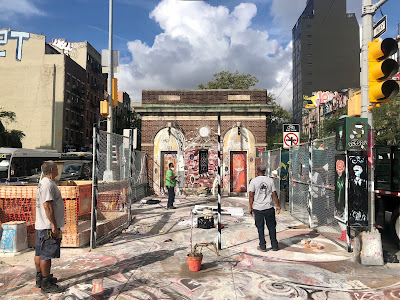 On Tuesday afternoon, city workers arrived to erect a fence around the long-vacant Allen Street Bathhouse here at Delancey... 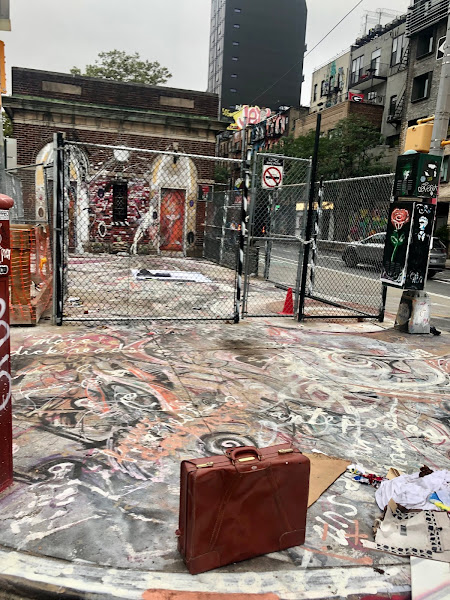 This was the city's latest heavy-handed tactic in the summer-long battle against unhoused trans artist Nadja Rose, who had been creating murals on the vacant bathhouse's walls and surrounding sidewalk space in recent months.
None of this pleased city officials (led by the Parks Department), who would dispatch sanitation trucks and the 7th Precinct to discard her belongings and art supplies. She would always return. There were also social-media reports that the city had her locked up "in the psych ward" several times.
Observers (optimistically) wondered why the city couldn't use this as an opportunity to create some type of artist-in-residence program at this neglected space that has long been a favorite spot for taggers.
Her work prompted admiration from passersby here on the Allen Street Mall, a passage with an out-of-business Subway sandwich shop on one corner and a Starbucks on the other. (As for the old bathhouse, plans for a cafe in the structure date to early 2016.)
Writer Jeremiah Moss has documented Rose's work here on Instagram...

A post shared by Jeremiah Moss (aka Griffin) (@vanishingny)

There haven't been any sightings of the artist since the fence went up, we're told. But she did leave some parting messages... 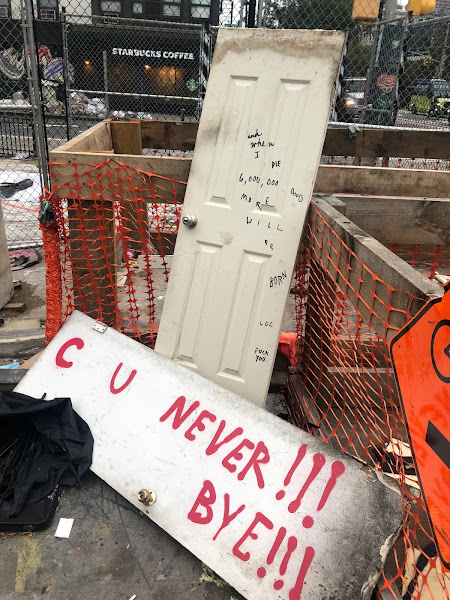 Barriers around the tables in Tompkins Square Park. Fences around the boathouse. Barricaded streets around police precincts.

If it’s not authorized, it’s vandalism.

And barricaded streets all around

"vacant" does not mean up for grabs, nor is vacant an accurate description of what this small building is. Before the Pandemic the city had finalized plans to renovate this building, lease some of it for use as a small cafe, and most remarkably, open the north side as public restrooms. This little building is planned to serve the neighborhood and not just a single individual.

I have long admired Jeremiah Moss and their website Vanishing NY, but they are wrong about this one. Jeremiah was also wrong regarding "the right" for all night parties in Washington Sq Park. Sure city spaces are for all to enjoy but there are limits with all things and a little respect goes a long way in making a better society.

I've really been enjoying the art. Best thing to happen to this structure in ages. Don't give up Nadja!

She has no more "right" to that space than any other person or artist. And frankly NO ONE has a right to vandalize city property. What happens if another 1 or 2 "artists" decide that is also THEIR space to do their artwork... is there going to be a fist-fight over it?

This structure is NOT her property to deface, and it's not for anyone else to deface either. Taxpayers own it and have to pay to get graffiti off.

And, IMO, Jeremiah is totally off-base on this. Why doesn't he invite her to deface the façade of the building HE lives in, if she is such an artist and he supports her work so much? Or maybe she can use the walls of his own apartment and do her art there.

And I don't care if she's straight, gay, trans, bi, or anything else - that's NOT the issue. The issue is that she has no right to do what she's been doing.

They're trying to make the story about being trans when the story is about vandalism. The city will now have to pay to remove the spray paint. Money that could be used for, I don't know, maybe homeless shelters.

It would be great if a space was created for her and her work, I would fully support it, but at this time it doesn't exist and no one person has a "right" to vandalism.

All kinds of ugliness is "authorized," some of it visible in these photos. When I walk four blocks to the store I witness authorized towering ugly buildings, authorized incessant construction work, authorized institutional and political greed.

It would be helpful to her if we could find other places for her to paint instead of fighting the Parks Department for access to this one building. Has anyone tried to help her find a building owner who would welcome her art, or a community center in need of brightening, or maybe even some apartment dwellers who would love to have a living room wall livened up with her colorful art? It's a big city. There are lots of options.

What does trans have to do with anything? This is vandalism. It's ridiculous we even need to have a discussion about this.