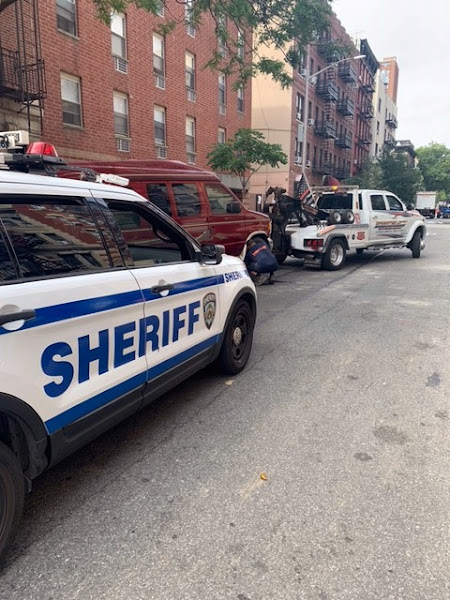 You may have noticed fewer vans parked on East Village streets.
Late last week, the city Sheriff's office and the NYPD Document Fraud Unit discovered an "operation of alleged fraudulent and illegally registered vehicles being used as Airbnb rentals," Sheriff Joseph Fucito told the New York Post.
Five of the seven vans, which reportedly had New Jersey plates and expired tags, were parked in the East Village.

California-based journalist/video creator Uptin Saiidi recently slept in a 1999 Ford Econoline parked on Second Street — for $97 a night.
Spoiler: He was glad he did this for a night but would never do it again...
As for the recently confiscated vans, it wasn't clear if the same person owned all of them.
Back to the Post:

Sleeping overnight in a van is legal, according to the city's Department of Transportation — provided it’s not parked in the same spot for 24 hours in restricted areas.

When parking is not otherwise restricted, no person shall park any vehicle in any area, including a residential area, in excess of seven consecutive days, the agency's rules note.

Fines typically start at $115, the NYPD has said. The Sheriff’s office did not comment further except to say the "investigation in this matter is ongoing."

The van listings have since been removed from Airbnb, per CBS 2.
A few weeks back, EVG contributor Stacie Joy spoke with this traveler from Toronto who rented a van on Third Street between Avenue A and Avenue B for $85 a night. (Not sure if the authorities confiscated this van.) 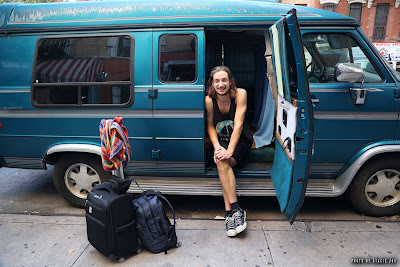 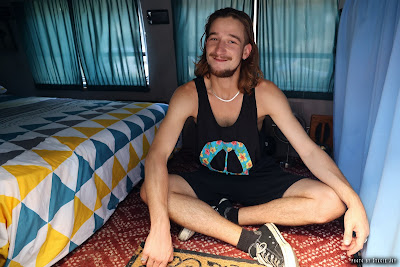 According to Stacie, the guest was excited about this Airbnb adventure. He was not worried about the lack of a bathroom or shower. (The Airbnb host leaves suggestions for nearby businesses to use the restroom and options for showers.)
Stacie climbed in for a moment and noted that it was clean but hot and stuffy. The front seats were empty — and drapes were partitioning them from the bed in the back. The keys also did not work in the ignition.
As ABC-7 noted, authorities dubbed this impounding as — no kidding — "Operation Room Service."
Thanks to all the readers who shared these links. Top photo via @NYCSHERIFF.
Posted by Grieve at 5:12 AM

The time to remove free car parking is now .

Yup. What we've been thinking of as parking spaces are really AirBnB's for cars. I've got no problem with the cars further subletting them for people as long as they're paying their own rental and cleaning fees.

I'd rather find a good spot on the street (I know many!) to curl up and sleep that put myself through a DANGEROUS overnight sojourn in a van on the streets of NYC.

Awesome. Next do the cars that never move like the jeep with the trailer and canoe on 2nd street and 1st ave

Noticed a lot of vans parked long term recently in the neighborhood. The fact that they're telling renters to use local businesses for bathrooms is bullsh#$.

As someone who gets up in the night to use the bathroom, this is a total nightmare scenario.

In the video, there's a brief shot of the listing where it looks like the host recommends the bathroom in "Tomskins" Square Park. In addition to those bathrooms being a general nightmare, they are closed at dusk.

This is a business in Santa Monica CA. A guy rents vans. Hes a vanlord. They park on the street and the tenants are people on social security or disability. They dont ticket or tow vehicles used as residences and he parks in safe areas. Thousands of vans and RVs are parked on west coast streets and are primary housing.

Glad to hear another perspective @11:58AM but if you're a frequent reader of this blog you must know that now is the time to end the horrible scourge known as "free car parking". This being said despite the fact that it's illegal for more than 7 days or without moving it once a week, lest you risk a fine. But that's not the narrative "they" would have you believe.

If we're getting rid of "free parking" then out go all the Citibikes, b/c they're a corporate venture that is making use of street space that I pay for with my taxes. If I can't park a car for free, they can't park a zillion bikes for free either.

What a fun idea! Too bad they are removing these!

Why is going to the bathroom such a huge deal? You can re-use recyclable plastics as waste containers. This way you are supporting recycling and not wasting water by needlessly flushing a toilet.

I am going to Air B&B that sinkhole on my block. And you can even make peewee in it!

100%. Add to the list Lime, Revel and all other car/vehicle sharing services.

So in your world, only the rich who can afford $600+ a month private parking could own a vehicle in the city. Real 1% mentality there IMO. Might not be your intention but just like congestion pricing, you're making the rich peoples' lives easier. Smart.

The jeep with the trailer and canoe on 2nd street and 1st ave - is owned by the one of the guys from SPIEGEL restaurant on the corner of 1st Ave & 2nd st. They also take the parking spots their for their awesome off-road BMW motorbikes. Such cool neighbors..

This is not an issue with free parking as one person started. But with how a company like airbnb let this scam happen.

We've really gone from the sublime to the ridiculous unlike 11:58's west coast reportage these are opportunists taking advantage of thrill seekers and urban adventures talk about tourist trap! Glad they're glamping (pun intended) down on this fad 85 bucks a night! if your really looking for a thrill try almost any motel in Camden

what an abuse of our streets, and local businesses restrooms,

i don't know why nyc hasn't done what some other cities have - residential neighborhoods should have permits for parking. car owners pay a fee (smaller than garage fees for sure), get a permit, then are allowed to park in their own neighborhood. visitors pay meters or garages, or get fined for parking without a permit.

i am pretty tired of hearing people defend their need for free parking. why should my tax dollars support space for parked cars? why not charge car owners (privilege in and of itself to afford a car, insurance, gas, and not to mention the time one must have on their hands to look for parking) for parking on the street?? it doesn't have to be $500 for a garage space or nothing. i pay higher rent to live in an apartment with indoor bike storage for my bike, because there is nowhere safe to park it on the street for free. or i pay for citibike. or pay for public transit. if i bought an expensive hunk of metal i would be able to park for free? it doesn't make sense.

Dammit I missed my chance to live in a van down by the river!

@10:33 then why not have cyclist require a license to ride a bike and pay insurance like of motor vehicles, since they are required to follow traffic laws like other motorist. People can argue why should our tax dollars pay for bike lanes that are not used 24/7. Listen there are bigger issues than bike lane/ free parking in our neighborhood. Just look at 14th and 1st ave. That area needs to be cleaned up.