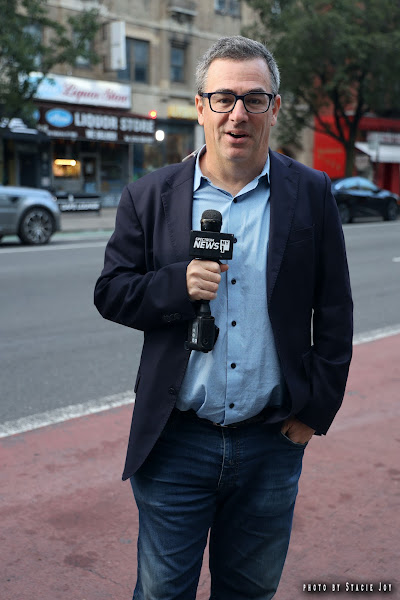 Text and photos by Stacie Joy
It’s 7 a.m., and Roger Clark is precisely where you’d expect him to be at this hour: in front of a camera for NY1.
This past Monday, the veteran broadcast reporter is in the East Village to cover the Village Voices street exhibit with the Village Preservation team members. There are two live hits; the second includes trustee Leslie Mason and executive director Andrew Berman and touches on Patti Smith and Charlie Parker. 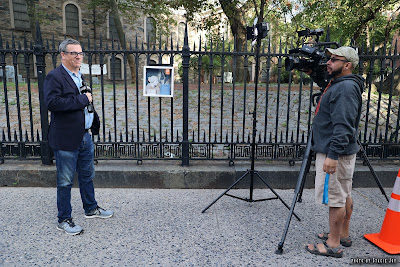 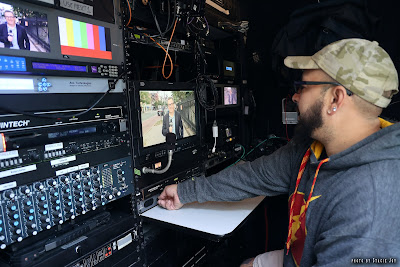 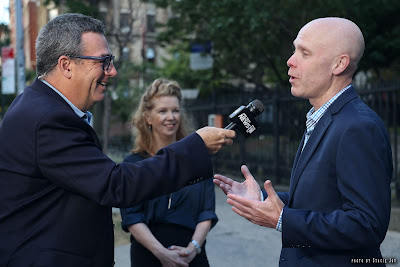 Clark strikes set after some on-air patter with anchor Pat Kiernan and a few funny fumbles in the lead-ins. He then heads over to meet musician Randy Gun in front of Jean-Michel Basquiat’s former home-studio on Great Jones to talk about the Basquiat bartending book exhibition and sale.
Clark OK’d for me to tag along with him this morning to watch him put together a report. Today’s assignment is definitely on the less death-defying side. Through his 20 years at the station, viewers have seen him gamely jet-skiing, tap dancing, BMX biking, ax throwing, rock climbing and more.
I’m pleased to see that Clark is as affable in person as he is on the air, cracking gentle dad jokes, donning hastily tucked button-downs, and joshing with his happily at-ease interviewees. He’s interested and curious about his subjects, easy to talk to, and quick to laugh. He seems genuinely surprised and pleased and a touch embarrassed when people walk by and tell him how much they enjoy his reports.
Watching him at work is fascinating. I expect a team, but it’s just him and Guido, his camera operator. Clark sources, writes, interviews, and edits his own material. When Guido’s not available, Clark shoots it too, clutching an iPhone and fiddling with an external mic. There isn’t any intermediary assigned to run interference when I show up to ask questions and take pictures. There’s no pretense either.
Guido has another assignment, so I watch as Clark interviews Gun. They discuss the Hudson Valley (Gun has a home in Phoenicia and Clark once lived nearby in Newburgh), punk music and the history of the Bowery. Long after PR agent Barbara Wagner and Janis Gardner Cecil, president of JGC Fine Art, the art-house exhibiting the book, have left, the two of them continue to chat about shared passions. 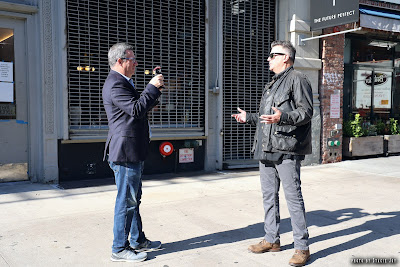 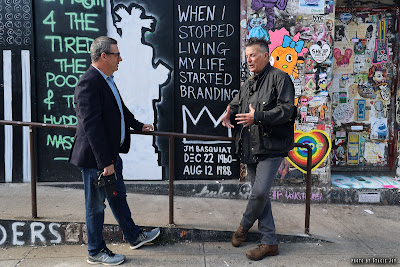 Once the interviews are over, Clark and I sit down at a nearby cafe to talk about his relationship with the East Village. Clark is a native New Yorker, growing up in Staten Island, the Bronx and Queens, attending school at Stuyvesant High.
Clark tells me that he didn’t really start exploring the area until he was 16 or so. He mentions seeing people wearing Canal Jean Company pins, music/band tees, and sporting mohawks and began to seek out record shops, poster places, and clothing stores.
I ask him what a perfect day in the East Village might include. He mentions Veselka for breakfast, some walking and people-watching, an egg cream or beignets at Ray’s Candy Store, shopping at record stores, and checking out Trash & Vaudeville. He lists Gruppo for pizza for dinner with drinks at a favorite spot such as the Library, Double Down Saloon, Niagara, 7B/Horseshoe Bar or Dream Baby, and a show at the Bowery Electric. (His band Perp Walk has played the Bowery Electric, Niagara’s and Otto’s Shrunken Head.)
We also talk about media personalities and dream jobs. When Clark was a child, he wanted to play for the Mets but couldn’t hit a curveball and instead became interested in sportscasting. He has a degree in journalism from Syracuse University and worked his way up to the spot he holds today: NYers favorite morning features reporter. And if he weren’t at NY1? Perhaps a morning news correspondent gig like Mo Rocca’s, or a commentator like the now-retired Charles Osgood or the late Charles Kuralt.
Clark is also a passionate sports fan, and I recall the question my editor suggested that I ask: What will the Mets need to do in the off-season to contend in 2022? Clark doesn’t hesitate to explain that the team needs to dump some poor performers who the fans are accustomed to (he’s looking at you, Dom Smith and J.D. Davis) and get a new closer. Edwin Díaz isn’t handling his business, I am informed.
He’s finished his snack and will soon start editing his segments from his Upper East Side apartment for tomorrow’s NY1 morning show. (You can watch the features here and here.)
As we part ways, a neighbor walks by and behind his back gives me an enthusiastic thumbs up and mouths, “ROGER CLARK — YES!” 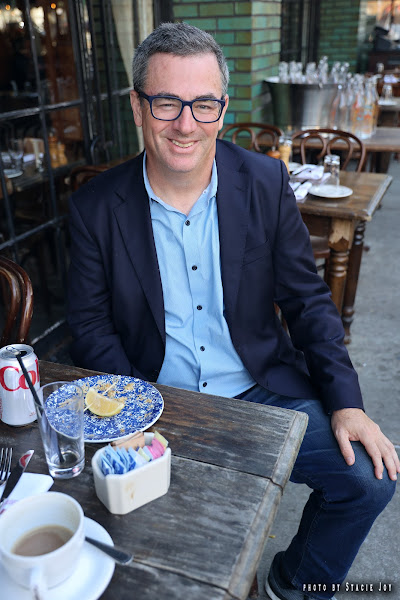 Years ago, while working on Law & Order, we would occasionally shoot inside the NY1 newsroom. I remember getting excited when I realised I was standing next to Roger Clark's desk. Love this guy.

I went to junior high (and maybe elementary) with Roger and can confirm the mets love and the lack of pretense. He's an overall great guy and deserves all the love and success he gets.

Roger is great! Always enjoy his stories and hits on NY1 - thanks for covering and Stacie for the pics

great job, stacie! i'm so glad he's as winsome as he seems on the air.

NY1 is the only thing I miss about not having cable.

Roger has been one of my best friends since I met him in high school and he is as genuine as the day is long. A wonderful guy!

He's my favorite on NY1; the only one whose reputation is still sterling.