One last seasonal fling for Halloween Adventure and Gothic Renaissance? 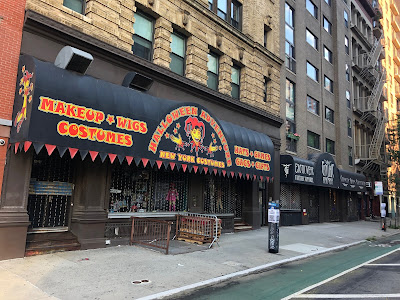 Halloween Adventure has returned from the dead.
The shop at 808 Broadway/104 Fourth Ave. between 11th Street and 12th Street reopened last Wednesday, per Time Out. (Reopening-for-Halloween signs had been on the storefront since July.)
As you may recall, back in January, Halloween Adventure's owners announced it was closing due to a pandemic-related drop in business during 2020. However, after an effort to sell many gift cards, the shop was able to return for another Adventure.
Meanwhile, next door, sister business Gothic Renaissance is also reopening soon ... (this shop had closed in March)... 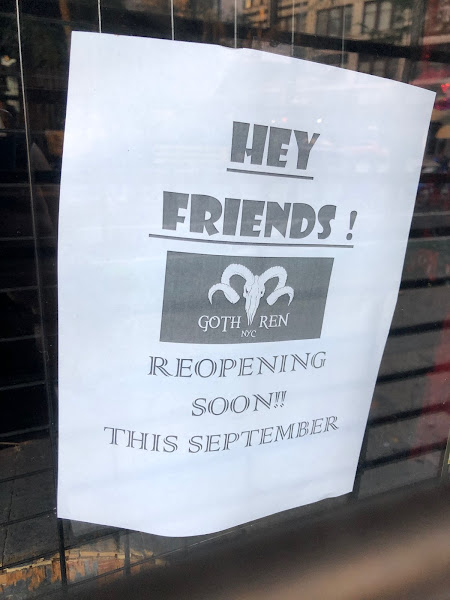 A Halloween Adventure manager told Time Out that the store plans to stay open through December "at the very least." Per TONY:  The manager said, "if sales are up this year on par with the before times, it's possible it could stay open year-round again."

"We've been here for so long and people are used to seeing us as part of the community. It would be amazing could get enough business this year to keep going strong...and forever."

However, as The Real Deal reports, this is likely the last season for both businesses as the retail condo at 808 Broadway and 104-110 Fourth Ave. is for sale with a $15.95 million ask.
The block-through property combines two adjacent buildings: 808 Broadway (completed in 1888) and 104-110 Fourth Ave. (circa 1981).
The company that operates these stores has been around since 1981, starting in Pennsylvania and New Jersey. Halloween Adventure first arrived in the East Village with a pop-up in 1991 and continued to do this in various locations until 1996, when they found this current space.
They have not commented on their local plans beyond 2021.
Previously on EV Grieve:
Costume drama: Halloween Adventure is closing next month
Posted by Grieve at 5:01 AM

Here’s hoping that one season becomes many somehow. I’m pulling for HA and GR!