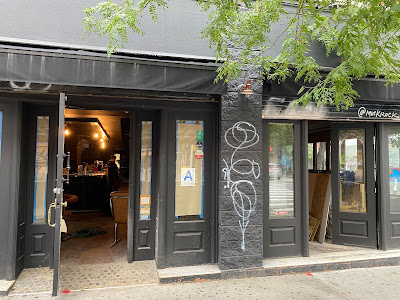 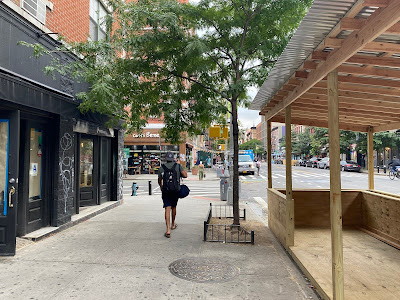 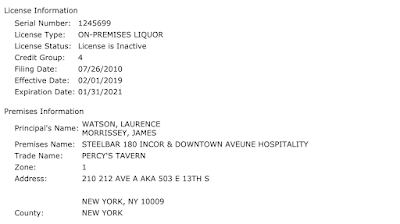 In September of 2017, Community Board 3 did not approve Morrissey's application to open Honey Fitz at this address.
A neighbor says that contractors have been working almost daily on interior renovations, adding a stage in the front half of the space on the 13th Street side and installing six TV sets, among other things.
So with all those monitors and a stage (live music? comedy?), there's a sports bar/entertainment vibe here, but so far, nothing definitive. And no sign of future Community Board notices for a new liquor license.
Percy's quietly closed here in 2017.
H/T Sonya and dwg
Posted by Grieve at 4:50 AM

Just in case anyone thought upper Avenue A could not get any louder.....

Percy's was a loud sports bar with shouting sports crowds and loud trivia nights with an MC on mic who also played loud music. There were always noise problems for neighbors who lived above them and their open windows were a menace for neighbors on the block. Can expect more of the same from owners Larry Watson and James Morrissey (VNYL, The Late Late) and now an Open Restaurants street shed, 6 tv's and a stage. This block already has 4 bars and a sports bar and the noise is off the charts.

Yes I head it is VNYL owners no longer Portnoy - still pizza and bar food .
I heard this is schedule to open October 1st

Only in NYC would people look at a huge corner retail space that's been vacant for 4 years & conspire to keep it empty because of "noise" when I'm pretty sure you can't distinguish whatever noise is coming from the four bars across the street or the six down the block. This was the kind of local hostility that always chased after Heathers... even though Superdive was a MUCH worse neighbor.

May need some journalism to figure out if the noise levels during late hours (during the pandemic) are actually intolerable here and worthy of complaint/resistance.

Or, maybe anonymous commenters just need to dig up some fake dirt on me again as a response

Walked by the 210 Avenue A location the other day, and staff inside said they expect to open November 20 and they already have their SLA approval (though I don't see where CB3 approved).