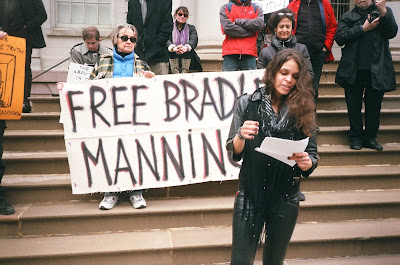 Faith Laugier, a prominent presence in the East Village and NYC activist community, died unexpectedly this past week. She was 42. A cause of death was not revealed.
Here's more on Laugier from the Daily News, which first reported on her passing.

Laugier became a prominent activist when Occupy Wall Street formed in September 2011 and protesters set up an encampment in Zuccotti Park in the Financial District.

Laugier slept in the park the first night of Occupy Wall Street protests, said John Penley, a friend. "There weren't that many people who stayed there the first night," Penley recalled.

The number of protesters in the park grew, and Laugier emerged as one of the movement's leading organizers.

Laugier's friends and family created a website to commemorate her accomplishments. News about a memorial will also be posted on this site. Her family also initiated a GoFundMe campaign to help pay for funeral expenses.
Photo courtesy of John Penley
Posted by Grieve at 7:30 PM

I loved Faith and walked into Zuccotti Park , on the first day of Occupy Wall Street , with Faith holding my arm [ Old Skool style ] and later Faith had become an Occupy International Legend. Thank you EV for posting this. I cried a whole day and could not stop when I first heard that Faith had transitioned to a spiritual realm. Faith will not be forgotten. Faith Laguer Presente !!!

Damn I have been crying so much I didn't see the comment typo I typed so Faith Laugier Presente !!