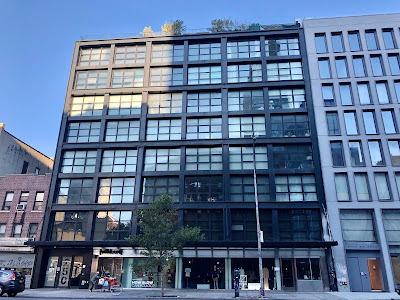 Howl Arts is ready to debut a second space, a 7,000 square-foot facility at 250 Bowery between Houston and Stanton. (Howl! Happening, which opened in 2015 at 6 E. First St., will remain in use as a gallery.)
The new space is going by Howl! Arts/Howl! Archive (HA/HA), which "expands upon Howl! Happening's innovative exhibitions and public programs and focuses on the thriving multi-dimensional artistry and history of the East Village/Lower East Side."
It will also serve as the headquarters for Howl Arts, which purchased the commercial space here in 2018.
Here's more via the Howl press announcement:

By the community, for the community, HA/HA will be activated with three exhibition galleries, as well as a library, screening and reading rooms, a chef's kitchen, and an outdoor terrace for special events.

Energized by the creative and disruptive spirit of the 60s, 70s, and 80s on the Lower East Side ... HA/HA expands Howl's programming capabilities and aims to advance Howl Arts' mission to preserve and showcase the legacy of often overlooked underground and experimental cultures of the East Village and downtown neighborhoods.

Howl's Permanent Collection, to be showcased at HA/HA, comprises over 3,000 objects, including art, rare digital and analog media, performance-art ephemera, and personal archives from the 1960s onward.

The collection documents the origins and growth of local cultural and social movements that have had far-reaching impact — offering a myriad of opportunities for new interpretations of the punk, new-wave, and no-wave movements; performance art; drag; street art; public-access television; nightlife; LGBTQ activism; the AIDS epidemic; and urban gentrification.

"Icons, Iconoclasts, and Outsiders" presents works by artists, writers, musicians, scenesters, performers, icons, iconoclasts, outsiders and other creators from the 1960s to the present whose life and work energized the underground and are now entering mainstream cultural discourse.

Selected works on display include Arturo Vega, Brian Butterick, Richard Hambleton, Helen Oliver Adelson, Marcia Resnick and Scooter LaForge, among many others.
The exhibit is up through Oct. 31. Hours: Wednesday-Sunday from 11 a.m. to 6 p.m.
This main-floor and lower-level space at 250 Bowery was previously the International Center of Photography, which moved to a new home on Broome Street. The Howl HQ is on the upper floors.
Posted by Grieve at 9:00 AM

This is not a very diverse selection of a multicultural neighborhood and how about the LES squatters or the Young Lords and Latin Kings ? Seems like the money people behind this are really doing this to make more money ? Dean Johnson ignored ? I could go on.

As long as HOWL arts has existed and as much good as it has done, its view of the EV and LES seems to just include everything west of Avenue B and north of Houston. Its staff and board are not very diverse at all, so it is not really representative of the LES overall. And its inclusion of the Arturo Vega Foundation, apparently not currently a registered not or profit organization, (Mr. Vega was the graphic designer for the Ramones) shows its identity is tied to the punk rock milieu. Not to mention the executive director of HOWL managed Patty Smith. So, not sure how much, as an arts organization, it has an interest in the full range and diversity of the EV/LES cultural heritage and promotion of the same. Its programming always seems centered on a rather circumscribed group of people.

I am an artist and I've been living in the EV since 1993. Thru the years, I've submitted slides when slides existed, Art on CD's and a couple years back I sent copies again of my paintings thru email. NO luck. Then another year I stepped into Howl, I met both Jane Friedman and Ted Riederer, Jane liked what she saw so I resubmitted again c/o Ted, No luck! I believe I have a decent resume and I believe my Art is Colorful and interesting enough, still no luck! Because I've never been invited to be part of an exhibition there. I believe, sometimes, the Art world is alot like the Music industry, it's who you know or who gets referred that gets invited to be part of an exhibition. I'm sure I'm not the only one getting turned down. So I kinda of agree with RRReality 1.

I'm perplexed (but alas, shouldn't be these days) by the whining here about Howl Arts needing to represent everyone in some kind of utopian finely tuned daily calibration. If you actually go this exhibition, you see their commitment to celebrating the history and diversity of the East Village with important artifacts alongside major works of art. There are plenty of avenues for community art (i.e., graffiti all around us and of course much more), but an organization with a long history has got the fundamental right to celebrate highpoints and yes, even celebrity, across the decades of their accumulating existence. Retrospectives that go back decades obviously will look less diverse to us, because we've come a long way and barriers to entry have eroded. That's not Howl Arts' fault, who were ironically ahead of the curve dating back to its origins.

We are not living in luxurious times for the arts, folks. When something like this manages to break through and survive/grow, without becoming a commercial investor meat market for furnishing mansions of billionaires with art, can we be a little more enthusiastic and stop whining?

While it's true that who you know helps you move up the art market ladder more often than not it's raw talent that gets you up on that first step. Basquiat was a total nobody tagging walls in Soho before he became world famous. As for gentrification ( in the EV or anywhere) without it the art world would cease to exist. While some artists, and others, may have been displaced by gentrification the fact is affluent middle and upper class people are the biggest supporters of all forms of art and music. Artists complain all the time that a rich person bought his/her painting said no one ever.