Looking at the estate sale of Tony Rosenthal, the sculptor who created the Alamo on Astor Place 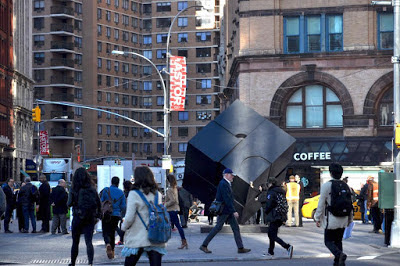 Fans of the Cube — aka Alamo — on Astor Place may have an interest in gawking at this. (Thanks, Lori!)
There's an estate sale tomorrow featuring the work of Bernard "Tony" Rosenthal, the American abstract sculptor who created the Alamo. He died in 2009 at age 94.
Per the sale notice: "This is a once in a lifetime opportunity to own pieces from his private collection amassed in his Southampton, N.Y., home and studio over several decades."
The sale includes some prototypes of the Cube, which are expected to fetch $4,000 to $6,000.
And some cube history via Village Preservation:

On November 1, 1967, an 8′ x 8′ x 8′ 1,800-pound giant black cube was installed in Astor Place as one of 25 temporary public artworks by the NYC Department of Cultural Affairs. However, it was so popular that local residents petitioned the City to keep it, and except for its absences for restorations over the past few years, it has stood there ever since.

Bernard "Tony" Rosenthal's sculpture was originally named "Sculpture and the Environment," but was eventually renamed The Alamo by his wife, Cynthia Rosenthal, because its size and mass reminded her of the famous Alamo Mission in San Antonio

Pic from the archives by Peter Brownscombe
Posted by Grieve at 4:30 PM

This is an interesting read - there's more than one of favorite cubes (more like FIVE!):

A friend of mine lived here for several years, then decided to go back to his native France, and as a memory, had the Cube tattooed on his body. :)

I remember when the Cube first went up in Astor Place. it was at the height of the 'hippie' era on St Marks and as a suburban kid we'd go down the 'the Village' and wander over to the new 'East Village' where the 'real' hippies were. It was a thrill to be in Astor Place and be able to spin the Cube around. Good memories of a time long lost.