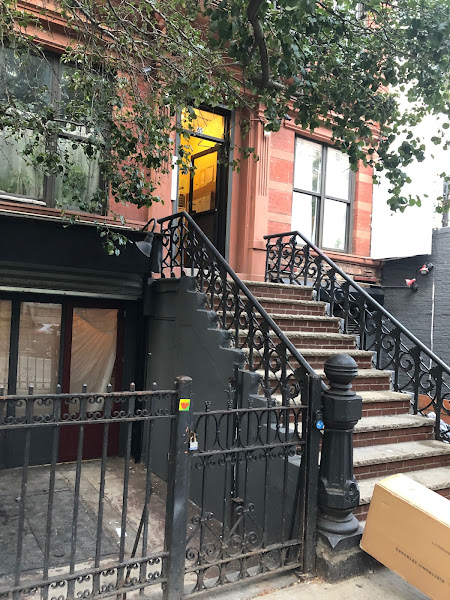 The owner of Jiang Diner and Hot Kitchen is opening a new restaurant at 65 St. Mark's Place between First Avenue and Second Avenue — the former Jule's Bistro space.
Tao An was on CB3's SLA docket last night for a wine-beer license for the space, going by Jiang Kitchen. (This item had received administrative approval, and An did not appear before the committee.)
According to the applicant's questionnaire posted on the CB3 website, Jiang Kitchen will feature 15 tables to accommodate 60 guests. Although the restaurant will serve beer and wine with meals, there is no bar for guests inside the space.
The hours: Sunday-Thursday from noon to 10 p.m. with an 11 p.m. close on Fridays and Saturdays.
This pending arrival means the end of Jiang Diner on Fifth Street between First Avenue and Second Avenue. The restaurant, which served Xinjiang-styled Northwestern Chinese food, closed for a summer break in late July. That space has since been cleared out.
Jiang Diner opened in the spring of 2019 and drew praise for its big-plate chicken and other dishes.
An also operated Hot Kitchen, a Sichuan restaurant, at 104 Second Ave. at Sixth Street. After a solid start in 2011, some regulars felt as if the quality began to diminish. In 2018, Hot Kitchen transformed its menu and added traditional Sichuan Skewer Hotpot and BBQ. (Jiang Diner also briefly moved into this space, which is now for rent.)
Jules Bistro never reopened after the March 2020 PAUSE. Workers cleaned out the space last September.
The casual French spot, which opened in 1993, offered free live jazz every night... and with its French film posters on the walls and red leather booths, it provided a throwback getaway on St. Mark's Place.
Restaurateur Georges (Café Noir, Bar Tabac, Cercle Rouge) Forgeois said that there wasn't really much room for outdoor dining here and running the place with 25-percent indoor capacity at the time last fall wasn't going to cut it.
H/T Steven
Posted by Grieve at 5:10 AM

I wish Jules Bistro could reopen in one of the many empty commercial spaces around the EV...

I will always miss Jules Bistro