Reports: Police arrest suspect in string of groping attacks, including 3 in the East Village 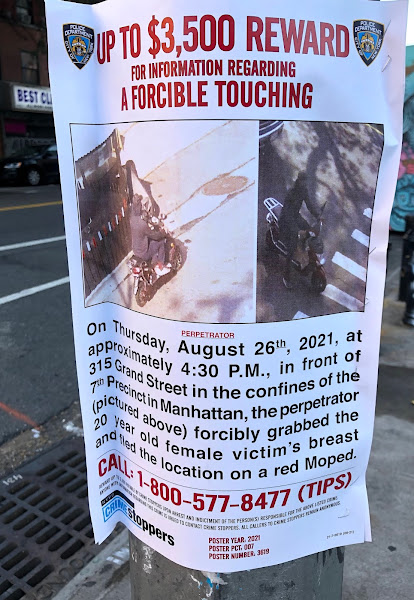 Early Friday afternoon, police reportedly arrested a 37-year-old suspect wanted in connection in a series of groping attacks around the city, including three in the East Village.
Reward posters had been posted on Avenue A and Sixth Street, where police say the suspect, named as James White, groped an 11-year-old girl on Aug. 26 at 5:40 p.m.
According to the NYPD and published reports, White allegedly grabbed his victims while riding a red and black Fly-3 moped. The most recent attack took place last Monday in the East Village.
White is charged with first-degree sexual abuse, endangering the welfare of a minor and six counts of forcible touching, according to court records and media accounts.
Posted by Grieve at 4:45 AM

Any updates on the murder outside McDonald's on First Avenue a few weeks ago? I haven't been able to find any follow-ups. With all the security cameras, you'd think the police would have found someone by now.

People are sick. Hope he is locked up for a long time.