Any signs of the East Village in the 1st trailer for Marvel's 'Hawkeye' series? 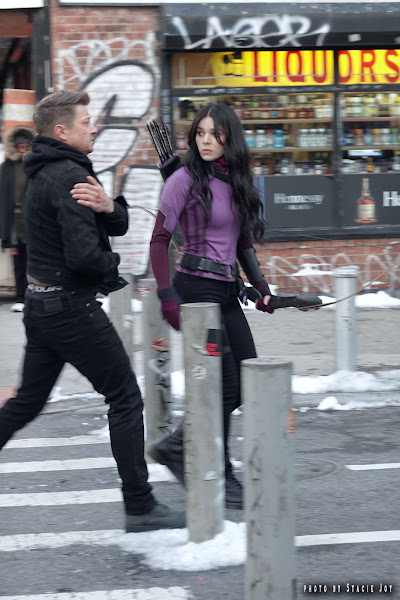 Back in December, crews for the new Disney+ series "Hawkeye" via Marvel Studios spent several days filming in the East Village (under the name "Anchor Point").
In the series, Jeremy Renner is reprising his Marvel Universe role as the superhero Hawkeye and his alter ego Clint Barton while Hailee Steinfeld plays his protégé Kate Bishop (also known as Hawkeye).
Anyway! The jocular first trailer for the eight-part series dropped today... looks solid, though there's no sign of the Discount Wine & Champagne's shop on 4th and A... or Key Food... but, at the 1:15 mark, that could be a building along Szold Place near 11th Street, a filming location...
"Hawkeye" debuts on Nov. 24.
And revisit Stacie Joy's photos from along Fourth Street and Avenue B here.
Posted by Grieve at 8:00 PM

Email ThisBlogThis!Share to TwitterShare to FacebookShare to Pinterest
Labels: filming around the East Village, Hawkeye

That was quite the shoot... with helicopter annoyances to not have some significant part. Really I want one of the dog... that's who I was ogling over.