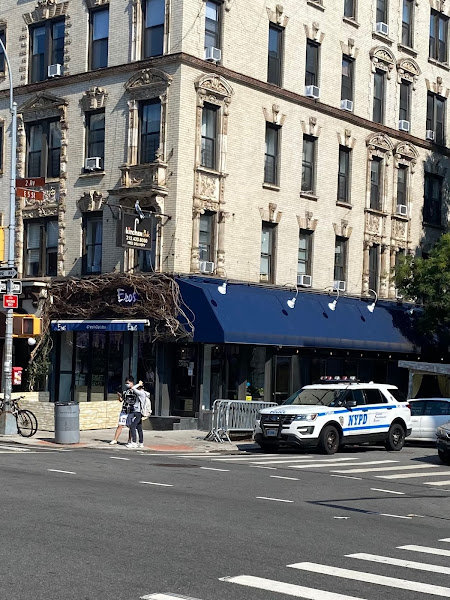 In recent months, paper has covered the windows at Kitchen Sink, the diner on Second Avenue at Fifth Street.
The dining room appeared to be closed and under renovation, but they were serving in the curbside seats as well as offering takeout and deliveries.
On Friday, new signage arrived (thanks to Steven for the photos!) ... and the place is now going as Eros, a Greek restaurant. (Same owners, we're told.) And the signage is identical to the Eros on Third Avenue in Murray Hill. 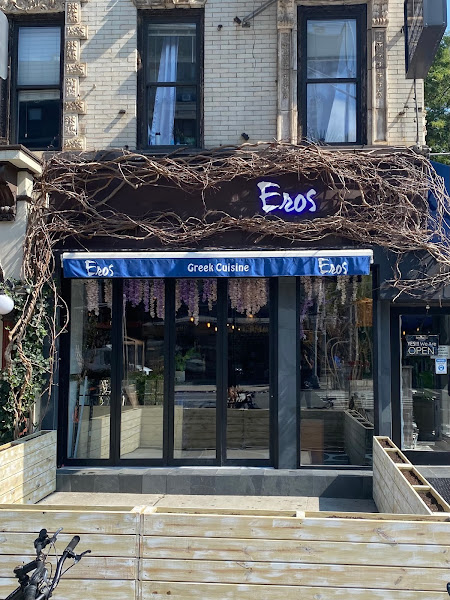 Not sure at the moment what the menu will be here — hopefully, some of the reliable diner fare will remain. The mostly renovated dining room is not yet open. The bar remains, though the TV sets have been removed.
The owners previously changed names from Moonstruck to the Kitchen Sink in the fall of 2015.
Posted by Grieve at 5:00 AM

Excellent. Hope they'll keep on the $59 deal they had on 3rd ave.

I hope they DONT. Too expensive for the East Village. Never was impressed with this place on 3rd Avenue. Overpriced and very small portions.

I've been coming here since it was the Cooper Diner way back when. Then it was Moonstruck. Then Kitchen Sink. The menu didn't change much - basic diner fare. Hopefully they'll keep some of that, because there aren't many greasy spoons places left around here.

This is a terrible mistake. We need a solid, decently priced diner. They should have done some research on what locals thought of this.

I stopped going here when they changed the seating and replaced all the low tables along the 5th Street side with high metal chairs. What used to be comfortable became uncomfortable. I understand they don't want people sitting and reading books all day at the tables, but the change was disappointing. I hope the new rehab features better seating.

We’ve been eating at Eros on 3rd Ave. both before and after they moved to the corner of 3rd Ave. & 31st St. Also done take-out. The last time we ate there was two weeks ago in their outdoor shed. Food was excellent. They still have their full Greek menu but have added a diner-style menu as well. (Previously, space was occupied by a Moonstruck Diner,) I called and spoke to one of the owners. She said they are not moving from 3rd Ave. and are not related to the Eros on 2nd.

I will miss the Kitchen Sink sitting at the long bar having a cold beer while watching a game on one of the TV's over the bar and then ordering some food from the large menu they had. Places like that are getting to be few and far between in NYC.

There are no decently priced diners left, for few years already. That concept is gone.

Funny, she just confirmed to me by phone that the village spot are theirs too. But indeed they haven't closed 3rd ave.

I can’t remember what it was called when I first moved here, but Quentin Crisp would be sitting in the window sometimes. I have been ordering delivery from this place for many years and hope they keep some diner fare too!

Ate here all though college. I hope they keep the diner menu. I love Greek food, but there aren’t a lot of spots like that in the Village for a classic omelette 24/7 or grilled cheese or milkshake.

Damn. Wish it was just back to being a diner. The name Kitchen Sink was disgusting.

Just took a look at the menu and it's pretty pricey. No regular breakfast either (only brunch).

Does anyone know where to get a decent casual eggs/toast/potato/bacon/sausage breakfast in the EV any more? I know there's B&H, Veselka (too many tourists for me) and Little Poland.

We used to be spoiled with choices!

Pretty sure they still do at least delivery and pickup as The Kitchen Sink. :) I still order from them all the time under that name.