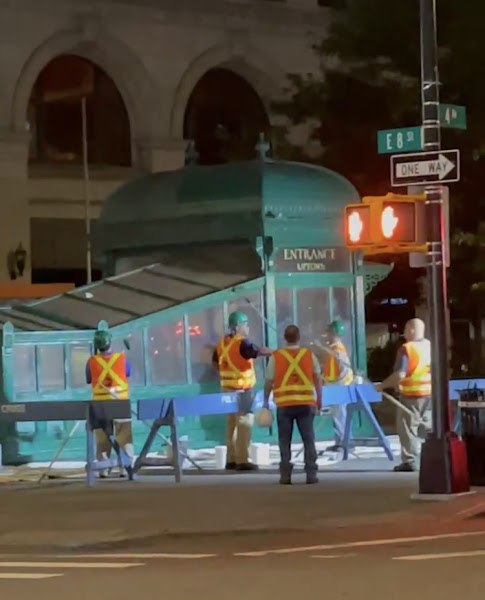 On Thursday night, MTA workers were spotted painting the northbound 6 entrance on Astor Place. (Thanks to @adammash for the pic & tip!)
Here's a look at the finished exterior (it appears workers are doing the inside portion next)... 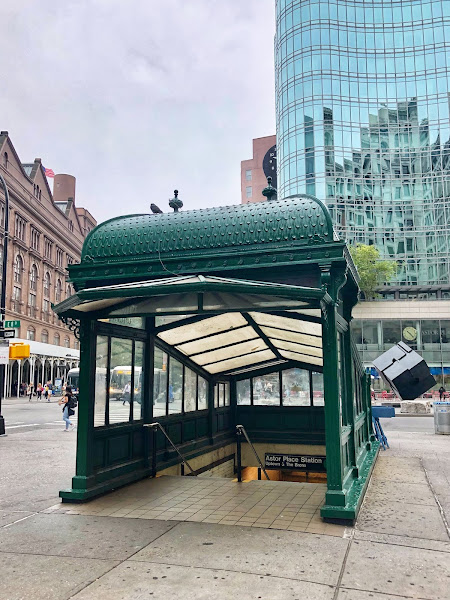 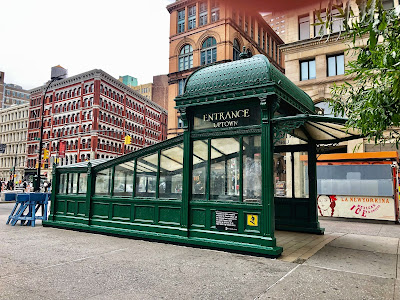 The landmarked station opened here in 1904 (EVG was first to report on this, though the New York World claimed an exclusive).
Here's a little more history via Wikipedia, which basically picked this up from the National Register of Historic Places:

The structure is an imitation of the IRT's original entrance and exit kiosks, extremely ornate structures made of cast iron and glass. The IRT kiosks were inspired by those on the Budapest Metro, which themselves were inspired by ornate summer houses called "kushks."
The Astor Place entrance is a reproduction installed in the 1980s and was made at the same factory as the originals. The replica was largely based on photographs by renovating architect Rolf Ohlhausen. Like the original entrance kiosks, it has a domed roof with cast-iron shingles."

That subway entrance is a work of iconic art.

I remember the day this beauty first appeared in Astor place, It made me think of the Art Nouveau counterparts in Paris and I had no idea until now, that it was based on a model in Budapest. Thanks EV G.

this is so weird: I've been using this entrance for 25 years and only now realized how beautiful it is!!

Two painters and three stand around supervisors. MTA really likes to make sure everything is done right and proper.

Thank God they kept it green

Many folks take it for granted that the kiosk has always been there. That's how ubiquitous it's become. Myself included until I took another look at the cop car crash scene in the original "Taking of Pelham 123". A view of the old Astor diner, and no MTA kiosk.

The overhead shot gives a great perspective of Astor Place in the early '70's.

Beautiful. I love it. Reminds me of being in Berlin actually.

Youngsters don't even know it's a repop of the original. Installed in the 80's renovation.