EVG Etc.: Remembering the 'country doctor' of Avenue D; Scoping out the Feast of San Gennaro 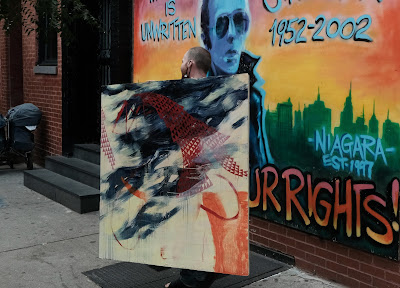 Photo on 7th Street by Derek Berg
• Remembering the "country doctor" of Avenue D (The New York Times)
• RIP Phil Schaap, Grammy-winning jazz DJ and host of the Charlie Parker Festival in Tompkin's Square Park (The New York Times ... thanks to Allen Semanco for the link)
• So far in 2021, 189 people have been killed by vehicles in NYC compared to 150 at the same time last year — the latest victim was a 3 month old in Clinton Hill (Gothamist)
• Celebrating Hispanic Heritage Month in the neighborhood (Off the Grid)
• "New York will no longer be anti-business" — Eric Adams (City Limits)
• The simple and delicious burgers at 7th Street Burgers (Grub Street ... previously on EVG)
• Pete Wells likes the far-ranging menu choices at Soothr on 13th Street (The New York Times)
• Film series celebrates the publication of composer, musician and writer Alan Licht's new book "Common Tones." Screenings include "Two-Lane Blacktop" and "The King of Marvin Gardens" (Anthology Film Archives)
• The 95th annual Feast of San Gennaro starts tomorrow (6sqft)
• A look back at the band 3 Teens Kill 4 (Dazed)
• Checking out summertime cicadas (Laura Goggin Photography)
• An end-of-summer party at the East River Amphitheater on Saturday (East River Park Action)
Posted by Grieve at 1:00 PM

Used to love going thru the Feast but it's so crowded and cramped with vendors selling junk now - it's an unpleasant experience.

From the Eric Adams article, he "unveiled a multi-pronged plan that includes tax incentives and zoning changes to woo growing industries like cybersecurity and blockchain..."

Uh, what exactly does this mean?