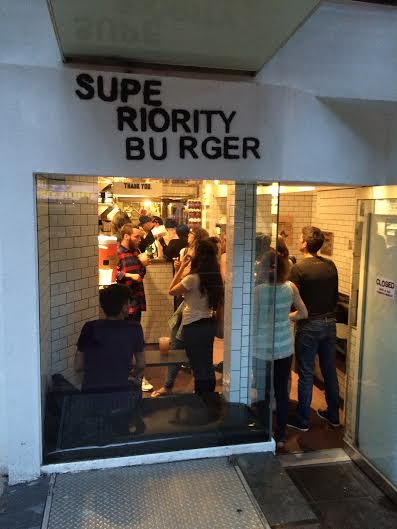 Superiority Burger opened last Thursday at 430 E. Ninth St. between Avenue A and First Avenue. And the place has been getting a lot of press/hype for its veggie burgers and other assorted menu items and music selection.

There are just a handful of items on the menu, and Grub Street takes a look at them here. Eater also has nearly a minute-by-minute update on new menu items and other Superiority-related news here. Eater critics Robert Sietsema and Ryan Sutton along with writer-photographer Nick Solares weigh in here.

Anyone else try it???

Updated 12:19
Gothamist notes that local residents have glued rocks to the wooden benches near Superiority to keep Superiority-goers from sitting on the tree guards...

Previously on EV Grieve:
What the cluck? Chickens in the works for former vegetarian hotspot Dirt Candy on East 9th Street

But is it being served in a hoof?

Good luck dissuading millennials from treating your space as their space, especially when they have the opportunity to dine on cheap food near a gutter.

Report Sorority Burger to 311. I can't get out of my building at times because people are sucking down octopus balls and eel vagina with a side of hello kitty on my stoop. It's not the residents responsibility to provide seating for Sorority's business, whether it's a stood, a planter, whatever. A planter is not a seat.

It's referred to as 'grab and GO' for a reason.

they dont have the authority to tell ppl on a sidewalk where to stand. the best you can expect of them would be one of those "Respect our Neighbors" signs. Lets bring back personal accountability. the only person who is at fault for sitting on those planters or a stoop is that person... no one else.. no chef, no business owner, no govt... its them and them only.

Please tell me octopus balls come in a hoof!

I live nearby and slip in and out when the crowd thins for a moment. I like both variations of the burger.

I do find the Next Big Food Thing Crowd to be annoying. But they will be off soon enough traveling Upstate for a taco stand. Still, the crowds don't seem bad enough to warrant gluing frickin' rocks to the tree guards!

Right. And bars have no control of their customers in front of their businesses either.

Why stop there? Why not sit on people's cars?

This is a place that should be on the avenues. Mid block on 9th street, a relatively quiet block, is depressing. I wouldn't want this anywhere near where I live and I'm far from being a NIMBY. Maybe rocks should be mixed in with their burgers to discourage digestion or at least recividism?

How many foodie places do they plan on cramming into the residential blocks of this neighborhood? This isn't a theme park.

Am I the only one who think the hoof joke (not all that funny the first time) played out a long time ago?

Is anyone else just extremely annoyed by that font choice and word breaking on their signage? I know, I know, of all things to get pissy about. But I'm a longterm vegetarian who doesn't even want to try this place because of that dumb logo. It's not even broken syllabically!

Because of human "superiority" that allows us to treat "inferior" animals as objects for consumption?

Then again, at least it's veggie burgers.
Hope it succeeds.

Your comment reminded me of a taco stand my ex used to take me to. I was curious and wondered if it was still operational.

Superiority Burger...pride goeth before the fall.

Man, remember the good old days in the Village? Back when we used to mingle on the streets and hang out with our neighbors? When there was some real neighborhood spirit in the summertime?

... So glad those days are over. Millennials, get off my lawn.

Responsible businesses don't have a negative impact on their neighbors.

I wonder if those superior meat burgers are grilled on the same cookery as those inferior veggie patties. Just sayin. Maybe that's all part of the craze.

They should've maybe sketched out the signage before painting it on. That's quite a goof.

Oops. There is no "meat grill," so it is total veggie. A real plus for diehards who mistrust veggie burgers cooked on a common grill.

Prices look good too. But if business booms let's hope they move on to the avenue.

They broke up the words in their name so that when some drunk guy comes in asking for a meat burger they can turn to him and say "No Supe for you!"

@12:59 PM - Kind of like Good luck dissuading rent regulated tenants from treating your space as their space, especially when they have the opportunity to live in an apartment forever on the cheap.

The gluing of the rocks was done by the lady that runs the "chiropractor" office that is open almost never. I thought the rocks were for decoration, they are so small that all but the slightest of vegans should not have an issue perching their arse there.

BTW - the burgers are money, meaning very tasty but about the size of a slider, so not the deal it appears to be for $6.

Millennials are so obsessed with food you'd think they had lived during the great depression. Superior, clean up your act.

Foodie culture is less about culture and more about being the first person in your social circle to try the newest gimmick and blather on about it. It's fussy and ephemeral. They'll be Shuttered Burger by next Spring.

anonymous 2:15 - take a walk along 10th street 1-2. it is FULL of small japanese food establishments that serve alcohol (including a japanese coffee shop that turns into a saki bar at night). a few have full liquor licenses. the area is saturated with bars.

while these businesses keep a pretty clean street and there is not an extraordinary amount of garbage (till late into the night for the very noisy garbage pick ups) the number of people waiting to get into these places create a constant din.

add to the mix the numerous bars and clubs spewing their drunken hoards and you will see how bad it can get. it often feels like the block is really times square.

@1259 anon, thats not your space, its the sidewalk, its everyones' space.

How did they renovate the space without a DOB permit? So they ripped off the Dept. of Health, NYC and taxpayers? Way to start a new business. Wonder if they even have Food Handler licenses.

I usually agree with all you nuts, but c'mon, they JUST opened.
The owners are chill and longtime locals.
The corny, suburban, line waiting, entitled people are NOT who this place is for.
Those are just the food-instragramming idiots that clamor for a place when it's new.
I haven't tried it yet but I wouldn't fault this business.
This seems like a nice, chill, casual, healthy, not overpriced and not appealing to bridge and tunnel spot.
So take is easy iight!

Living on St Marks in one of the twin buildings that straddle Two Brothers Pizza I feel for the residents who now have to deal with savages dining al-fresco on their stoop.
A few years ago our super was assaulted by some of the TwoBro "diners" when he was taking the garbage out of the building... it led to these giant 10 foot tall gates at the foot of the stoops where before there was just a small non-locking gate... you could have a shopping cart full of stuff and they just don't move, people these days have ZERO respect for others space.

"owners are chill and longtime locals"
Then they should have had greater respect for the residents. FYI no legal fire suppression system. So if they have a fire in the kitchen and the building is torched, I guess it will be landlord's fault.

Superiroty Burgers are su-perb. Just tried the burger, it's slider-sized but packed with flavor and delicious. Also tried the sloppy Joe, pretty spicy (and I like spicy) but also very good and twice the size of the veggie burger. Hints of cumin and cilantro are a plus. The burnt brocolli salad also very good. Whether you're vegan or not this is good food.