Nonna's Pizza arrives on Avenue A 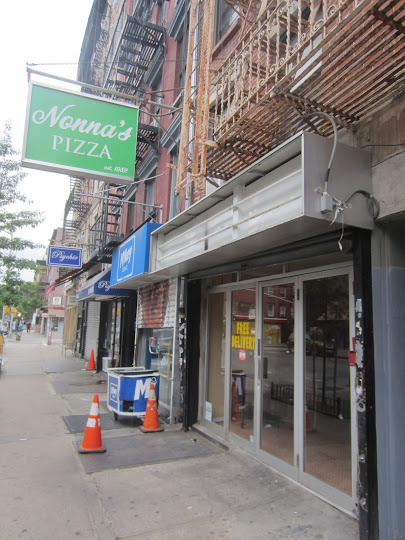 An EVG reader reports that Nonna's Pizza has opened at 201 Avenue A between East 12th Street and 13th Street.

According to the reader, the pizzeria is run by a grandson and his grandmother … the family patriarch operated pizzerias in Long Island and Westchester dating to the 1980s… 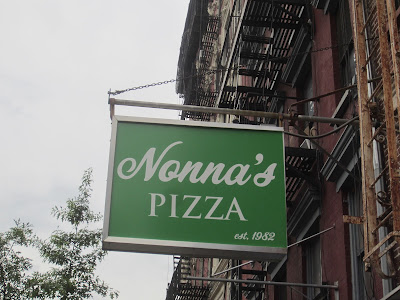 Before we heard from the reader, we thought it might be a new outpost for Nonna's L.E.S. Pizzeria on Clinton Street. However, the folks at Nonna's said that they're not expanding.

And how's the pizza? Unfortunately, the shop wasn't open yet for the day when the reader happened by. Anyone else try it?

The previous tenant, Fat Sal's, which closed in May, took over in May 2011 from APizzA.
Posted by Grieve at 4:30 AM

Before we heard from the reader, we thought it might be a new outpost for Nonna's L.E.S. Pizzeria on Clinton Street. However, the folks at Nonna's said that they're not expanding.

That's a shame, because Nonna's on Clinton Street has a slammin' vegetable pie.

I think maybe this is a relocation from the Nonna's that used to be on Bedford Ave in Williamsburg, which was quite good.

Nonna in Italian means grandmother (You're welcome everybody).

Nonna in Italian means grandmother (You're welcome everybody).

Is there anyone who didn't know that? (Or that Tio Pepe means Uncle Pee-pee?)

I hope it's the family from Williamsburg's old Nonna, as I concur that their pizza is quite good. Can somebody report or go for the greater good of our fellow pizza lovers?

@Dustin, your wish is my command. I stopped in today and had a regular slice and a Nonna slice; the latter is thin, cut in a rectangle, has fresh basil and a little red pepper flake kick to it, and I can report that both were delicious. I talked to Astros, the guy behind the counter, and he was telling me all of their ingredients (except the meat) are sourced from Italy. The flour, sauce, cheese, all from the old country. They'll start delivery service next week, and will be having specials. Far superior to both Fat Sal's and ApizzA.