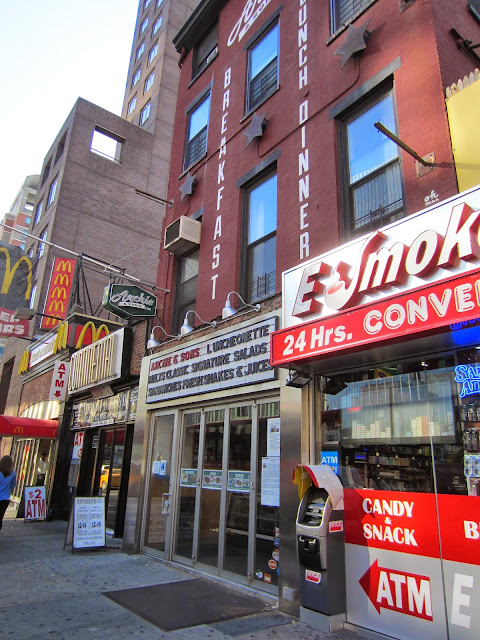 A prime corner of the East Village is in contract for roughly $50 million.

According to The Real Deal, real-estate investor Arthur Shapolsky intends to buy three properties at the corner of Third Avenue and St. Marks Place: 23 Third Ave., 27 Third Ave. and 3 St. Mark's Place. Basically everything from McDonald's to the corner.

The sellers are members of the Gabay family, whose patriarch opened a discount fashion outlet at the corner property in 1990. Both parties confirmed the agreement, though Shapolsky declined to comment on his plans for the site, which could accommodate a 41,500-square-foot commercial building or a residential one of roughly half the size.

The Real Deal cites the proximity of this corner to Edward Minskoff's 51 Astor Place aka The IBM Watson Building aka the Death Star directly across Third Avenue. 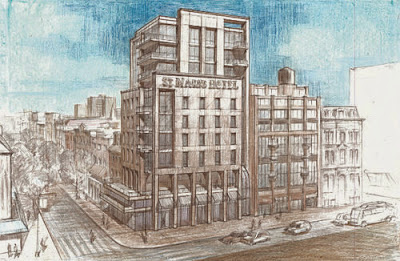 block after block of bland, temporary buildings with a lifespan equaling its depreciation. perfect for being destroyed the coming wars with eurasia.

St. Mark's is gone. It was always gritty, now it will be "any street USA". When friends came to visit I would always walk them down St. Marks at 4:00 in the morning, when it was still happening. After all the Japanese places moved in it was never the same.

I am speechless, and as a New Yorker with an opinion on everything, that's unusual. If you thought the EV vibe was done for when the gimmicky T-Rex appeared on the roof of the Continental, the continuing genericization of everything is much, much worse.

Looks like the Death Star will sprout babies all around the block.
Midtown South coming soon.

This looks to me like an old building circa 1820's? The peaked roof which I find unusual may have had dormer windows once upon a time. Another bit of history gone forever.

Bet that Korilla sign's gonna start looking much better to a lot of the posters here. All things being relative, ya know.

St. Mark's Place was always over-rated. I've avoided it for over 20 years.

For $50 million, hope they put something amazing on this corner; liked a Duane Reade, Bank of America, Starbucks, or a Marriott Courtyard.

How about a Hard Rock Café!

I have absolutely no recollection of a Gabay's on the corner of St Marks and #rd Avenue in 1970, and we were customers then. I'm flabbergasted to hear this.

It sure won't be the same. St. Mark's Place was happening in 60s! Not anymore.

A lot of this new construction is so basic and borderlines on the banal redevelopment they've done in Boston. It looks like formulaic, middle America shopping plazas where the new Walgreens is a sign of progress and the center of nightlife.

Remember when we thought the appearance of the BBQ and the Gap was End Times?

Yes the Gap was as bad as it could get. People thought that was the end. It was just the beginning. The long time property owners are cashing in. Hard to turn down $50 million dollars. These folks hit the lottery. Amazing to think how cheap these buildings probably were in the 70s.

Korilla's mural is the least of anyone's trouble.

How many people drifted in to Joyce Hartwell's 12-step programs to get help? (Because it was right there on the block, and beckoned, with countless life-changing stories to share. . . ) And then of course there was Coney Island High a few doors down. Fascinating history of this block at "Eclectic Life of a Row of East Village Houses," Christopher Gray, NY Times, Nov. 8, 1998.

Thanks, Gabay family, for continuing the sellout of the neighborhood. I'll be sure to remember it next time I don't shop at your store. Traitors.

NO zoning restrictions and NO landmarking protection and NO penalties/taxes/surcharges for those who buy and flip properties means that the city is enabling and ENCOURAGING the transmogrification of our city into a big NOTHING.

What the fuck is left to attract people to our city when NYC is just like every OTHER city with the SAME type of UGLY new buildings occupied by monied transients with commercial spaces occupied by national chains?

Local longtime property owner sells out and joins the 1%. Thats what happened. Put some blame on the sellers as much as the buyers. It like the Million Dollar Man used to say in the 80s- everybody has a price. Everybody.

But don't you see the blandness IS the attraction. When it was cool and gritty none of these wannabes would have been around. So bland is good! It's safe, suburban, and predictable, much like everyone's lives these days.

I am heartbroken at the destruction of the east village. Why don't we have zoning to protect historical sites. Isn't that the fault of the city.
The west village had the zoning in place so streets remain charming. So sad

I spoke with Trigger at the Continental, and he told me that his landlord told him that this is an exaggerated rumor, and that it is unlikely to happen any time soon.

To Anonymous 9:15: What historical interest / architectural interest is there in the three buildings on this site? A newspaper store that hardly sells newspapers? The Continental Divide? A MacDonalds that no one in their right mind would eat in?

To Anonymous 6:20: Yeah, you bought the buildings 45 or more years ago and now someone makes you an offer you can't refuse. You refuse because you want to preserve the "character" of the neighborhood. What rot!! And to those who attack the Gabay family (whoever they may be today) what sheer nonsense to call them traitors. Traitors to what? To your idea of how a neighborhood should remain static and without any change.

NYC is being removed from the hands of the people and transferred into the hands of the 1% who could not care less about preserving the character of the city for you. If we residents don't yank it back from them, no one else will.

I was never consciously aware of how very unusual it was to see corporate business suits in our neighborhood until recently when I've begun noticing them walking all over the place thanks (I presume) to IBM and its DeathStar ilk. RESIST THE MIDTOWN SOUTHIFICATION of the EV!! Die Yuppie Scum continues.

They have been scouting for some years...and they smell condo in every community garden, too.

Each of you laments the demise of the EV and condemns the evil sellouts and the owners who raise rents.

Yet, I ask, how many of you have reviewed the increases in property taxes in this neighborhood over the past 10 years? When the Dept of Finance decides to raise the transitional value (just read their website to understand) by 3X - based on their estimation of rental income - discounting any documented owner's submissions - then yes, longterm owners will sell.

Otherwise they do need to increase every rent they can.

When the CB has approved liquor license and cheered on the creation of an entertainment zone - then there is no market except for trendy stores.

So please - do review a few of the records on the Dept of Finance site - before you comment.

And perhaps you should ask your Councilmember why they agreed to having the Tax Commission alter it's policy and now deny pro se tax protests - which means an owner must hire an attorney and a special CPA.

@9:13...Yes, it is very hard for a landlord to make a buck in NYC right now. Guys like Mahfar, Cromin, etc are losing their shirts! It makes one wonder why they're shelling out so much money for these buildings?

You confirm my statement - you refuse to analyze why longterm mom and pop small property owners are leaving.

No where in my message did I support Cronin and ilk.

don't mind change but couldn't it change to something interesting?

If you're bitching that the Asians have taken over St. Marks, you might as well be like all the Southerners crying out to "take back our country." Sometimes change is good.