The retail space at 20 Avenue A is on the market 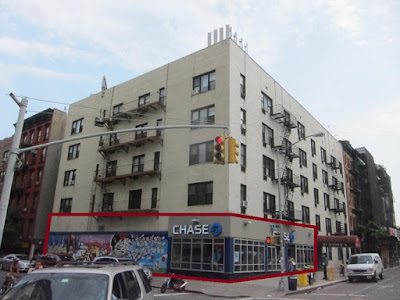 A tipster passed along a retail listing for 20 Avenue A, a space that currently houses Chase.

From the looks of the listing at LoopNet, the bank branch will be vacating the corner space at East Second Street in early 2016.

There isn't a whole lot of information about the property:


The 62-unit apartment building here exchanged hands last summer for $26.2 million. Longtime residents at No. 20 have noted that "the nonstop renovation has plagued the building." And there was also that Rogue Halal Cart business.
Posted by Grieve at 4:40 AM

Email ThisBlogThis!Share to TwitterShare to FacebookShare to Pinterest
Labels: 20 Avenue A, Chase

Wow. A bank branch is closing. (Of course the one I use the most). But still, a promising sign. Perhaps the banks no longer need to pay to support there own debt in the building any longer.

Is that the only Chase Bank in Alphabet City?

I got mixed feelings about this one, first this is the only Chase bank in the ABCD's (My bank became Chase after being swallowed by them years ago). Second most likely another bank or worst, sports bar or other chainstore will move in, (the devil you know is better than the one you don't). On the glass half full angle, could this mean that landlords have finally gone too far in rents that one of the biggest banks in the world thinks it's not worth it?

Q. What comes after banks?

A. On 1st Ave near 15th the HSBC left and Duane Reade took over. Right next to a CVS.

I believe the next chase bank in the area besides ATMS found inside the Walgreeens/Duane Reade is on 2nd Street / Bowery.

Crap. That's the closest Chase branch to where I live. This is bad news.

Maybe Chase is downsizing? If the landlord is splitting up the space, Chase could take part and another tenant could take the other. Just a theory

There is another CHASE Bank on Delancey & Essex

Yeah, I never thought I would be bummed about a Chase closing but this a branch that services a lot of people.

The Chase on the Bowery and 2nd doesn't make a big deal of it, but they have dog biscuits, and at a level that the dogs can actually appreciate.

I was on the upper west side earlier in the week, in the 100s, and I needed cash. On Broadway, I had to walk six blocks before I found either a Chase oR Duane Reade (that has Chase ATMs)! We're lucky down here to have so many.

such a bog space.. what will it be ? Another Duane Reade? one already 1 ave away....

The space on 5th street and Ave A empty for the a year.. people are so greedy that they will take a good offer so places sit empty for months and months.