Remembering Dorothy Day, with a call for a shrine in her honor on 2nd Avenue 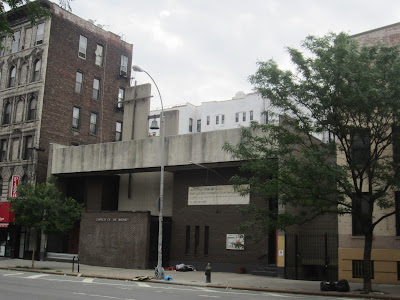 Tonight at 6, the Church of the Nativity is holding a special mass in honor of Dorothy Day at 44 Second Ave. between East Second Street and East Third Street.

Day was a journalist and social and political activist in the Lower East Side where she worked with the poor and founded The Catholic Worker. Today the Church refers to her as a "Servant of God" as the canonization process has begun.

Day's granddaughter, Martha Hennessey, will share readings from Dorothy's writings throughout the service. She will also talk about the parish's request for a Dorothy Day shrine after the mass, outside of the church.

The Church of the Nativity is slated close Aug. 1. After months of fighting the archdiocese for a chance to appeal, parishioners are now asking the Archdiocese to build a shrine for Dorothy Day within Nativity, or to build a chapel/retreat center within the new building should the church be demolished. Nativity was the parish of Dorothy Day.

The New York Times has more on this in an article from Monday titled Invoking the Radical Spirit of Dorothy Day to Fight a Church Closing.

The expected closure comes amidst a massive reorganization of the Roman Catholic Archdiocese of New York.

Under the plan, the church, founded in 1832, would merge with Most Holy Redeemer on East Third Street between Avenue A and Avenue B.

The conventional wisdom is that the Archdiocese will sell the property for retail-residential development.

One passer-by told the Times: "If you ask me, I think they’re trying to close it to make a high-rise condo so they can bring more money to the neighborhood." 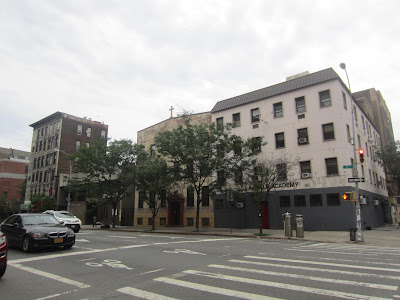 As for Dorothy Day, here's more from here granddaughter in the Times:

Ms. Hennessy, who lives nearby at the Catholic Worker’s Maryhouse when she is in New York, said she felt “a disconnect” between the drive to canonize her grandmother and the decision to close her church. She said she hoped a way could be found to honor Day and her legacy, perhaps using the vacant rectory building, if not the church itself.

"In the East Village, with all the affluence, the party atmosphere and the materialism, we still have poverty," Ms. Hennessy said. "They are doing their best to hide it, but if there was a shrine dedicated to the history of her work, that might be more helpful. It would raise the question of economic refugees."

Previously on EV Grieve:
Parishioners fight to save the Church of the Nativity on 2nd Avenue
Posted by Grieve at 9:41 AM

Email ThisBlogThis!Share to TwitterShare to FacebookShare to Pinterest
Labels: Church of the Nativity, Dorothy Day, the Nativity Church

I would more like to see the city make sure Catholic Worker doesn't fall to speculators. That is where her true spirit is, and not in a church that will soon be sold for profit.

I _think_ Dorothy Day is still officially being considered by the church for sainthood. The previous pope tried to stop it but basically just ended up slowing the process. Maybe, just maybe, under the new pope, Dorothy Day will end up a saint.

I guess I always assumed she went to church at Catholic Worker, I'm pretty sure they've held mass there since they opened. Did she attend Church of the Nativity? Was/is there a connection between the church and Catholic Worker?

Catholic Worker in the EV has a remarkable and wonderful history. Not only have they arguably been the most important social work group serving the poor in the EV, they have, over the years been involved in numerous protests, movement, and even art projects related to helping the poor, stopping wars, and generally supporting social justice. Day edited and wrote for the Catholic Worker newsletter published on 2nd Street for many years and that newsletter (more a small newspaper really) influenced many social justice and anti-war movements throughout the country.

Sadly, Dorothy Day's cottage on the far end of Staten Island was torn down by a developer who was scared that it might be seen as historic some day. (If I remember correctly, the developer went belly up and the site is just a pile of concrete blocks and bricks but a few of the other cottages near Day's survived.)