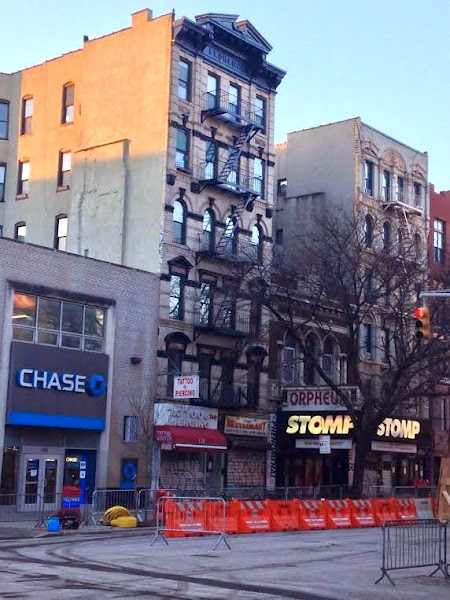 Tenants of the beleaguered 128 Second Ave. are holding a press conference this afternoon to "demand immediate restoration of heat and gas" in their building between East Seventh Street and St. Mark's Place, according to a media advisory about today's gathering at New York City Housing Court.

As previously reported, tenants filed a HP Action for Repairs and Services in March, citing inconsistent heat, lack of fire alarms, a broken fire escape, front door, and stairs, and other dangerous living conditions in the building owned by Icon Realty. Residents have also alleged "harassment from the landlord in order to push out rent-regulated tenants."

Back in April, The Wall Street Journal reported on the situation in the building, citing 89 open violations with the Department of Housing Preservation and Development, including 58 the department considered "immediately hazardous."

Reps for the tenants say that, despite the court order, Icon has yet to restore the gas or the the hot water.

Meanwhile, we have not heard anything on the status the Stage, which remains closed as it takes to the courts with Icon.

I sympathize with the tenants, but adding one more hazardous condition to the list by turning on the gas might not be the best idea.

They can bring in a portable boiler, but the laws protect the 1%. It is going to require armed resistance to get rid of these parasites. Or, we can just live like sheep.

Yesterday NYC brought charges against a Brooklyn landlord for endangering the health and safety of his rent-regulated tenants in an effort to drive them out of the building.

How is this different?

That can easily be fixed. Have the city take it from them and turn it over to the residents for, let's say, $100 per tenant and they can run it as a co-op.

Problem solved for Icon, the tenants and the city.

So sick of these assholes using buildings and the neighborhood as their own private leveraged investment account. These are people's homes and businesses. We fucking live here. Where do the owners live? Westchester? Long Island? The Bahamas?

I hope they get charges filed against Icon. Somehow.

It is insane to think this his happening, and it's happening a lot. Why aren't city officials doing anything about this? I feel like a sitting duck. We are all potential victims of landlords who want to drive us out of our buildings by shutting off essential services.

Yes give it to the tenants for $100 or make it a co-op. Legal issues aside- Who pays for all the repairs? Does the co-op rent out the ground floor to a bank/chain for 50k a month to finance the repairs? What is the legal process for taking a building from its legal owner? Typical unrealistic moronic knee jerk reaction. Yes that's an 'easy' solution. Oh and this one 'these are peoples homes' Uh- you RENT. YOU DO NOT OWN THE BUILDING. How difficult is that to understand? Why are people so stupid? Why does it mater where the owners live? Its their building. Why doesn't the city act? Typical nanny state liberals. The city runs your life cradle to grave. The city is incompetent and corrupt. Would the city collect more revenue if this was a luxury building? Would they collect more tax dollars from high income tenants? Does anyone think about practical realities?

Why do all the DUMBEST people comment as 'Anonymous' ? Just a questionn

The practical reality is that Icon acquired the property knowing that it housed rent-regulated tenants. The price that Icon paid was discounted to reflect that fact. Icon is entitled to exercise its rights as an owner but it is not entitled to illegally harass and intimidate its tenants, rent-regulated or not.

The way the system is set up there are no incentives for playing by the rules. A tenant who moved in, in 1980, for $250 would be paying today $800 going by RGB assigned rent increases. Let's face it, even de Blasio charges his own tenants fair market rent though he currently resides rent free. Bills have to be paid. And no expenses are going down in price, not a subway fare up from 50 cents in 1980 to current $2.75 nor taxes not anything.

Possibly the residents could call in the same team / task force that led to the arrest of the two landlords involved in that Crown Heights debacle? I'd love to watch Icon go down. Months with no heat, gas or hot water. Shuttering Stage and now Cafe Pick Me Up. Enough is enough.

In 1980 the owner of the building benefited from a tax break. That benefit came with restrictions and building owners should honor their agreements. If these restrictions are unfair then why do owners agree to them in the first place?

Why doesnt comrade DiBlasio charge non market rates? He has a salary and minimal expenses. Typical hypocrisy. Do as I say not as I do.

Yeah there are incentives. They're called MCIs. And if you don't like it, go buy a building in Ohio (@ Crazy Eddie).

It would be great if the Attorney General's office would go after Icon and other similar outfits and make it clear that the owner either:

b) the owner forfeits the building to NYC on the basis that the owner bought the building under fraudulent pretenses, with no intention of adhering to city or state housing rules.

I also think anyone who wants to buy a building containing RS or RC apartments should be REQUIRED to deposit $200,000 (at least) in escrow with NYC - with that money to be used to provide services to tenants if the landlord starts playing games, or the entire amount will be forfeited by court order in cases as egregious as this one.

I know of no instance where someone has been *forced* to become a landlord against their will! You only own a building if you BUY it or INHERIT it.

The tenants should do a mass rent strike.

Anonymous at 3:11 PM. I agree with your general point, but the outsized percentage increase in the price of a subway token reflects the fact that the subway is not run like a free market business, and that the MTA employees are unionized and making higher incomes than they would in a more competitive market. They also accrue stupidly outsized pension benefits. In a free market they'd have defined contribution plans paid for on their own nickel, not defined benefit plans paid for by the long suffering taxpayers.

"If these restrictions are unfair then why do owners agree to them in the first place?"

Anon 4:14 I think you are asking this question seriously. Owners have no choice, there is no agreement on their part. History of rent regulations is that it was mandated (laws enacted) during the 1970s when vacancy rates dropped after Vietnam War and national economic crisis when building stalled. The Laws have faced legal challenges even up to Supreme Court (which declined to hear the case with no explanation) http://www.nytimes.com/2012/04/24/us/supreme-court-declines-to-hear-rent-control-challenge.html?_r=1&gwh=49B2BBBF22BBBF4CA3333121E04D5D0A&gwt=pay
Of course it is only speculation but do wonder how the Supreme Court would have decided.

@8:49am: On the contrary, owners DO HAVE a choice: don't buy the building. It's just that simple.

Owning a building is a CHOICE and if people make bad business decisions (by paying a ton of $$ for a building that they know has many RS/RC tenants), then capitalism says the building owner SHOULD lose their shirt on the deal. If the only way you can buy & run a building at a profit is to do a bunch of illegal stuff, then you're not qualified to own a building - you're a failure who's in the wrong line of work!

People buying buildings in this marketplace are not country bumpkins; they are street-smart, lawyered-up, and too many are willing to do unethical and/or illegal things to "get rid of tenants." Yet they bought the building KNOWING that those tenants were in place and are entitled to stay there.

Anyone who has the $$$ to buy a building in this over-heated market needs to follow the rules (and don't act surprised to find out that there ARE rules!), or else invest their $$$ into some other business. Anything else is a pathetic attempt to justify harassing tenants and to deliberately profit from human misery.

Do you realize what you are implying in the following "the only way you can buy & run a building at a profit is to do a bunch of illegal stuff ..."? That it is not possible legally to have a profit while running a rent stabilized building. Well that says something about the system.


Icon is in contempt now. August case, stay tuned. Vacancy decontrol must be repealed, too, to preclude tenant harassment via neglect and worse— as these and scores of other Icon tenants know from dozens of illegal acts, threats and personal injuries due to incompetence and efforts to make them leave— such egregious stuff as it's neither okay nor legal to do to tenants as a landlord, in New York City or anyplace.