Where the 'Girls' are today 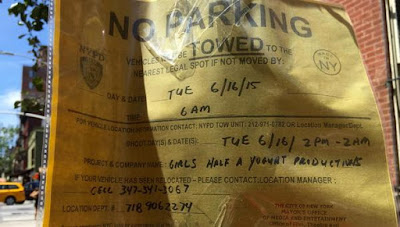 Cast and crew of the HBO television series "Girls" will be filming around parts of the neighborhood today, if this is of interest… the above notice is on East 13th Street between Second Avenue and Third Avenue… there are also notices posted on Second Avenue and parts of East 13th Street and East 12th Street… the show will be starting its fifth season.

Thanks to @cassidyfein for the photo!
Posted by Grieve at 4:24 AM

Is this the one where the manic pixie drops her acai bowl?

Are they bringing back the junkies & dealers for this one?

Looked like something was filming in John's (12th Street)... acai there?