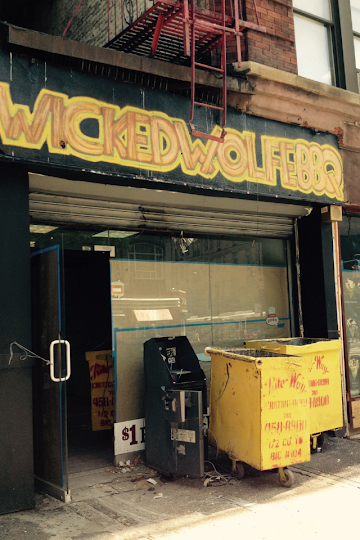 Prior to the arrival of the construction crews, there was a sign in the window announcing that Mimi's Hummus has designs on the small space… 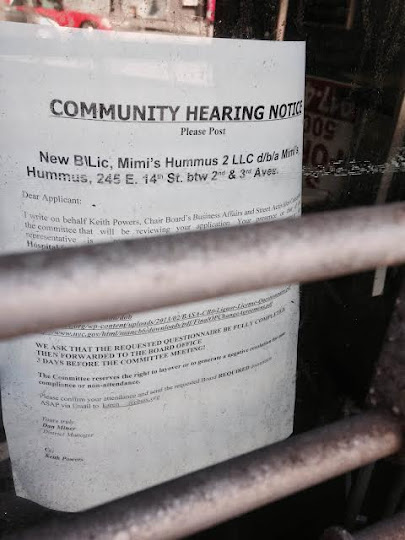 On May 1, Eater reported that the Ditmas Park-based Mimi's was expanding into Manhattan with locations at the Vanderbilt food hall near Grand Central and on East 14th Street.

Mimi's, which Eater says serves "some of the city's best hummus and shakshuka," will have an expanded menu here that includes "a few larger plates at dinner like lemon chicken meatballs, brisket, and the Middle Eastern rice and lentil dish mejadara."

And Mimi's will have company next door. As we first reported on April 20, a T-swirl crêpe shop is opening in the recently shuttered Subway (sandwich shop).

Lastly, not to fear, Pinch is keeping an eye on what happens to the iconic Wicked Wolfe BBQ signage. The $1 pizza/BBQ combo shop lasted about eight rather sad months in business.
Posted by Grieve at 4:30 AM

Sounds good. I wish them luck.

Mimis is acting like the previous bad neighbors. Wicked, Joey pepperoni, the empanada shop. They use the back area. Thats a fire egress. They store they smoke and lounge. They slam things around. In the time it took to write this they have slammed the door a half dozen times. They are pressed by landlords high rents to stay open late so this will be going on from 8 am till after midnight most likely. The space amplifies all noise. The previous had to be constantly asked to be better neighbors. When that fails I turn to turning away customers. It's easy. The best way is to tell them they are bad neighbors and I would not eat there. It worked for the others. I have done this peaceful first every time. I can't take this hell . They make noise and wake me up is no way to live. It's easy to turn away customers. If you go in and enjoy please ask them to be considerate. Wicked was asked on many occasions to add a sound deadening material in the base of their sinks to lessen the impact and reverberating sound they did nothing. Please help to get them to be nice neighbors. Thanks to ev grieve. Much like calling 311's best part is being able to tell your story.

Mimi hummus continue to be bad neighbors . Making noise loud noise that make you jump all hours of day and night. The rents collected by the nickle Grubb ing bildiricis are stupid hi. I they rent undersized place think they can use fir egress as closet and hangout. They have to stay open very late to make the stupid high rent. The tenants suffer. The landlord don't care have caused regular multiple times a day violations of the warranty of habitability. Joseph a dDavid bildirici so called religious men who ride rough shod over all causing others ie the hummus folks to ride over others. Please Mimis don t be like the boys bildirici. The men who needed me to tell them to send flowers to a a longtime worker who keeps their business going does all they need and want and tries to keep the tenants getting their needs was sick for some time. I had to tell the millionaires to send flowers. ... None caring men causing others to not care. Mimis please CAREANOUT your neighbors . Please don't use you fire egress as anything other than firw egress. You can't be quiet back there. All noise is amplified. Tired of the hell.