Reminders tonight: Films on the Green in Tompkins Square Park 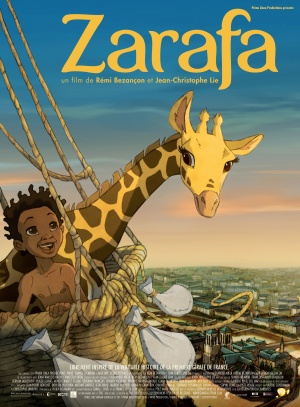 Tonight is the second of the two screenings in Tompkins Square Park in the Films on the Green series ... the free outdoor French film festival in NYC parks... Here's what's playing tonight at 8:30ish...

The plot of the film has a grandfather telling his grand kids the story of Maki, a young boy who escapes from slave traders, befriends a giraffe (the title character), cross the desert, meet a pirate, and a few other things on a trip that takes him from Africa to Paris.

It is a kids movie, though unnamed sources tell us that adults might enjoy it as well. (Plus, you can hide the alcohol in the kids' belongings.)

Find more about the Films on the Green series here. They'll be more free screenings in other city parks throughout the summer.
Posted by Grieve at 4:30 AM

Email ThisBlogThis!Share to TwitterShare to FacebookShare to Pinterest
Labels: Films in Tompkins Square Park, Films on the Green

Only two movies, and both French - I think TSP got shortchanged this summer.