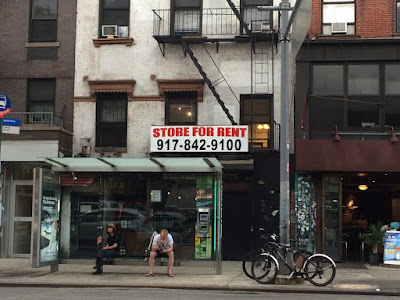 Several readers have pointed out that a "store for rent" sign arrived above 93 Second Ave. on Tuesday. The space between East Sixth Street and East Fifth Street has been home to the Lit Lounge these past 13 years.

The space has been on the market for several months. There's a listing at Misrahi Realty.

We reached out to a Lit co-owner to see what might be happening here… whether the bar/club/music venue is closing or moving to a new location.

The Fuse Gallery, located in the space behind Lit, closed in September 2013.
Posted by Grieve at 4:35 AM

Fuse Gallery and Lit Lounge are two places that attracted all the right type of people to the East Village. Residents had issues with the noise and music at times and there will be many locals who will not miss them at all.
Let's just hope that something decent will take the space. Being a landmark building, it can be difficult for new owners/lessees to make something nice out of something that worn out looking.

sigh i remember when locals were complaining about the meek hipster kids that Lit was attracting on weekends. saints compared to the greek life/bridge and tunnel garbage we have now.

Is this the same block as the long-empty street level space that briefly housed an Italian grocery/caterer in the '90s with the residential upstairs occupied by same family who'd had a murder on the premises decades before? (Next door was a wonderful, much-missed funky cafe gone nearly ten years now.) Would love to see you update or repost story you once did on the space if/when possible.

I think this place in a previous reincarnation was Sugar Reef, a West Indian restaurant. Don Cherry used to come by and play for people. That's what happens when you live in a neighborhood for close to 40 years...you have memories.

'Can't support or demoan the loss of Lit Lounge, a venue who shut out generations of young musicians and other artists with their 21+ policy. This place wasn't the beehive of artistic activity some of you think it is. They ousted a pre-Giuliani NYC metalhead's longtime weekly metal show for more profitable and non-live music ventures. Live music was secondary to djs and drink specials the past x years or so (pick your numeral for "x".)

The East Village does need a new place for live music besides the even worse Otto's Shrunken Head which is barely in the EV and also 21+.

"a venue who shut out generations of young musicians and other artists with their 21+ policy." Don't blame the places. It's the intense obsession of the State Liquor Authority with underage drinking. They can put you out of business in a hurry. So you're faced with this utterly absurd fact that you're considered old enough to put your ass on the line in Afghanistan or Iraq or wherever we choose to intervene, but you're too young to have a Bud Light in NYC. It puzzles me, too.