Report of an OD at the 1st Avenue McDonald's 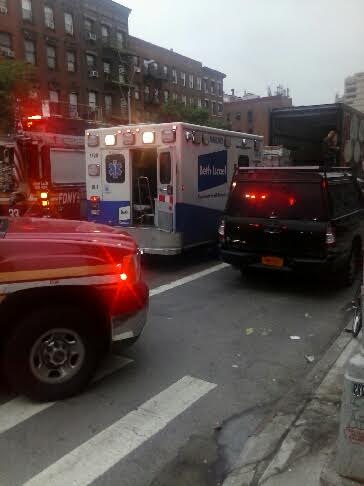 According to multiple witnesses, emergency responders carried a young man out of the McDonald's on First Avenue near East Sixth Street around 6:30 tonight. He was pronounced dead after being administered CPR.

Witnesses said that the man died of heroin overdose in the restroom. His female companion was seen on the street inconsolable.

Photo via Bill the Libertarian Anarchist

Sad poor young man. Pray for him to find peace and joy in the hereafter. So many deaths due to this awful addiction which is so difficult to cure. Peace brother.

Beth Israel ambulance - methadone clinics which never actually titrate downward but always up, is what made Beth Israel rich.

Any word on the young man's identification?

I was at the corner when all the emergency vehicles bullied through traffic: 2 ambulances, a fire truck and another emergency truck.

At the same time I was watching the film 'Heaven Knows What' at the Sunshine. If you're not familiar, it is a gut wrenching (fictionalized) account of young heroin addicts on the streets of NYC. And several scenes depict these kids shooting up (and o.d.'ing) in various fast food restrooms around the city.

It saddens me when I see heroin addicts on the streets in their falling-standing position, I can only imagine what lives they must have and what misery they endure. After all these decades I had hoped that heroine would have exited the city or at least young people would heed the warnings of trying this drug. My sympathies to this man's friends and family.

i guess the silver lining to this very dark cloud is that we live in a nyc now where four emergency vehicles respond to an OD. my friend in san fran was telling me about the hordes of young people and homeless shooting up openly downtown these days.

SF and LA have problems that you have to see to believe. SF has a huge problem with human feces all over the streets. Heroin and Meth are the issues. LA has 50,000+ sleeping outside every night. What would NYC be like if you could sleep on the sidewalk from 9pm to 6am like LA? There are tents and encampments everywhere. And panhandlers. How does a 21yr old end up with a sign on a freeway off ramp? There are parks in SF that have taken the benches out because they were permanently occupied by junkies. These cities cant respond like NYC. They are overwhelmed. Google 'skid row LA'. Its 50 blocks of hell. At least NYC has shelters and tries to help. LA and SF are the wild west. Its depressing and heartbreaking to see people live like that. NYC is light years ahead of these cities. After a trip out West the scene in TSP seems small and quiet. There are more junkies camped under one freeway overpass in LA than there are in TSP. Its a mess.

There is so much sadness in this world, especially this city :(

How dare emergency vehicles bully their way through traffic! They should sit there like the rest of the vehicles! (Huh??)

So Sad, that Wine and Dine is still around Hope they find the crew that sold this rat pision

It would help if someone here mentioned the stamp label

Its almost never poison, usually too pure that causes death

I think there is some really strong heroin making the rounds these days. His name was "Mo."