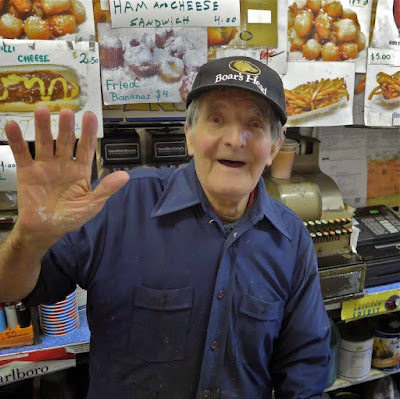 Ray Alvarez, the 82-year-old proprietor of Ray's Candy Store at 113 Avenue A, looks to be off his feet for a little while.

A friend of Ray's reports that he was recently having trouble breathing. He apparently has felt weak for some time. It finally became too acute, so he visited his doctor, who sent Ray straight to Beth Israel.

We're told that he is doing well and in typically good spirits. (He has also been asking for seconds on the hospital food.)

A number of people have been keeping him company at the hospital, where he'll likely remain until next week.

Several of Ray's regulars made a large card that people can sign at the shop starting this morning. The card will be delivered to Ray at the hospital. In addition, several friends chipped in to buy him a new bed for his recovery at home. 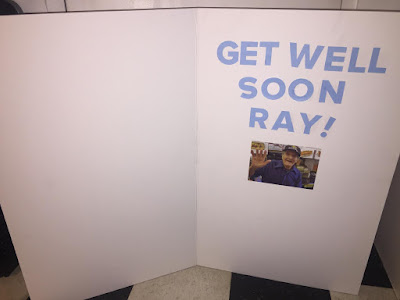 [Photo via Shawn Chittle]
Posted by Grieve at 4:40 AM

Best wishes to you Ray! And here's hoping for a speedy recovery!

I don't think there has ever been anyone so loved in the entire history of the East Village. Get well soon Ray we all love you and know you love us back.

Can someone deliver a statuesque dancer to his room stat?!

Love you Ray. Get well quick so I can have a coffee egg cream with you made by the master himself. xoxoxo
Melanie
East Village Corner

When we visited him he was placing orders for the store on his iPhone and was making jokes. Said he is glad he is now getting help because he hasn't been able to breathe for weeks and he was wanting to give up. So this is really good and he surgery was a complete success!

Here's to a full and speedy recovery. We love you, Ray!

GET WELL SOON, RAY! Sending all best wishes to you!

Thanks for the update, Eden Bee. He is going to feel a lot better, and this surgery could add years to his life.

C'mon Ray, get well, and quick. The only egg creams I ever got from you were chocolate, with an occasional vanilla when I was feeling bland, but @Melanie's mention of a coffee version suddenly made me realize that, right now, there's nothing I want more. So I hope your recovery is a rapid and long-lasting one! Best wishes to you, hope to see you back behind the counter soon.

Yeah he already felt way better. He really couldn't breathe or walk or even stand up without pain. If there's any astronomical bills I was thinking of some kind of GoFundMe but right now a group of us have pulled together to help out with some things for when he gets out. Which will be next week.

*As for coffee egg creams, who knew? Best of both worlds!