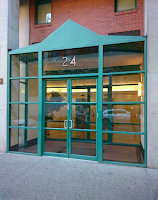 A 32-year-old homeless man reportedly grabbed a 26-year-old woman around midnight Sunday outside 24 E. Seventh St. between Cooper Square and Second Avenue. According to the Post:

At that point the good-Samaritan vagrant, who is believed to sleep in nearby Cooper Square, came by and scared off the ­attacker, sources said. He then ran after the man, pursuing him for several blocks down Second Avenue to East Third Street, where police made the ­arrest.

The Post reports that the suspect, Casey Holloway, who is also homeless, was charged with sexual abuse and forcible touching. He has nearly two dozen prior ­arrests.

The identity of the man who broke up the attack was unknown.

Image via Streeteasy
Posted by Grieve at 8:30 AM

It doesn't surprise me but obviously this was reported from by someone sitting a Post outsourced desk in China. No one has been sleeping in Cooper Square for at least the past year. Its a construction site from 5th to 8th on 3rd Ave.

@nygrump, I walked past "Cooper Square" last night around 11PM and saw someone sleeping underneath the Cooper Union Building (41 Cooper Square)... easily could have meant that location.

Two dozen prior arrests eh? And this guy is still on the street?
Only in NY.

Deblasios NY is a scary place to live.

June 24, 2015 at 12:14 PM - oh right, the camping area in the back - I haven't seen travellers out there lately and didn't think of that...the custodians seem to be moving them out early and there were some barriers up in the front to keep them out from in front of the nursery school.

Deblasios is indeed a scary place, what with the violent perps walking around, the dead tree branches crashing down, and the infrastructure fixes n'er coming around....best thing to do is get out of town.

Bill saying not to vote for a political perp, and to arrest Bush first, Rumsfeld ("unknown unknowns") second, and Cheney third.

"Deblasios NY is a scary place to live" - really? You really think? Curious to know what you would have thought of Beame's/Koch's/Dinkins' New York, all of which make De Blasio's city look like Never-never land.

"Deblasios NY is a scary place to live"

This was Joe Lhota’s campaign line. He lost, big time. Except, of course, in Staten Island. Because now, as it was then, it’s BS.

DeBlasio won big time, yes, but with only 24% of registered voters actually voting (which set a new record low). Just stating a point of interest.

Obviously Beame, Koch, and Darryl Dinkins were disasters, but at least they weren't commies like Comrade de/De/da da Blasio.

Yes, low turnout but this is the trend not only here but throughout the nation as well. We are a nation of misinformed, lazy, morons. Funny, Republicans, as per their suppress the vote campaigns, usually love low turnouts, their elderly white base always shows up but since all politics is local, low turnout here did not help them. BTW, I was a poll worker last year; I could count the number of millennials who came to my station on one hand. And they were older millennials, late 20’s, early 30’s.

You live in NYC. What do you know about.Republicans? This is a one party town. Why vote if your choices are Democrat A or Democrat B? Whats the difference? A poll worker? Im sure you didnt engage in any fraud right? Pathetic. We need to supress partisan one party hacks.