A mural continues to grow on Avenue C 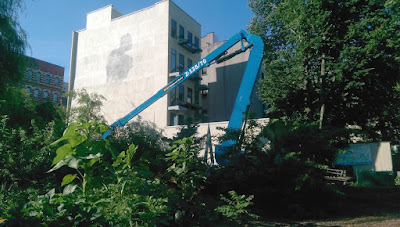 On Wednesday, artist Zio Ziegler began work on a mural on the north-facing wall of the recently unveiled 137 Avenue C at East Ninth Street … 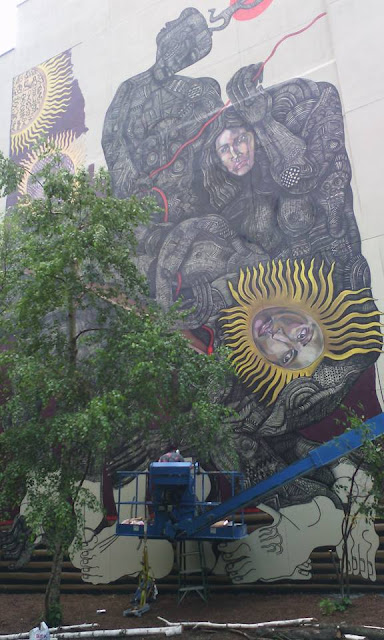 The mural kinda looks like the plot of a Ridley Scott film. Actually though the building owner commissioned the wall to a nonprofit, the Solutions Project, to paint on in conjunction with the launch of their clean energy NYC campaign.

On Thursday, the Solutions Project held a kick-off event next door in La Plaza Cultural Community Garden where Mark Ruffalo, co-founder of the campaign, and Leonardo DiCaprio spoke while launching a national campaign that aims to "make clean energy more accessible and affordable for 100 percent of the people." (Read the news release about the campaign here.)

Several community leaders and activists were also in attendance.

mmmm.... A mural to clean energy that meant cutting down trees, uprooting a neighborhood garden, running an engine for four days and using as much spray paint possible....A Ridley Scott movie indeed.

DiCaprio we need low and mid income housing. Our people are being tortured out of their apartments and the super afluent and celebs are taking the area. RE developers and landlords use murals in their marketing as a way to lure idiots with the art thing. It also makes them look good and serves as a front for gentrification. Celebs stay out. If you want to help do a low income anonymous-work with one of the housing groups. Do you read this blog Leo. Have you heard about landlord harassment atrocities and that NY has become a place for the 1%. You think that that's a good thing?


These are multi million dollar condos ok. I wonder if Leo bought one? Clean energy, for who the 1%? The landlords around here turn off the heat and hot water and create hazardous conditions for the 99% who built these gardens. In addition this building housed The Sunburnt Cow which was one of the areas douchiest nuisances and I heard that they want a full liquor license for a new venue which will help keep afloat the lux condos so that they can keep their maintenance low.

It is a interesting piece of art and should stand on it's own merits not serve as a commentary for hatred of people with financial means.The building before was a leaning derelict this is a nicely done replacement. I believe it is a rental not condo's not sure status of ground floor other than retail.

The whole building sold for 2.5. The rentals went for around $5,400 per month under the prior owner. Don't know how much they will go for now or if they are condos. They are market rate and can only go up from here. Public art placates the people.

Interesting? yes. Joyful? not so much... I just wish they had used a local artist - show some solidarity if they are avoiding paying current tax rates by keeping the former walls intact.