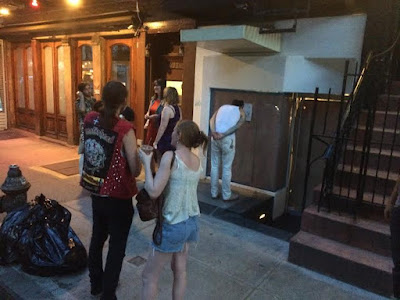 An EVG reader has noted a steady stream of people coming in and out of the former Dirt Candy space on East Ninth Street this week. Paper still covers the windows on the storefront between Avenue A and First Avenue.

As we first reported on April 28, a menu for a jokey place called Chickens arrived in the window (Chicken Dip with Chicken Chips!)... 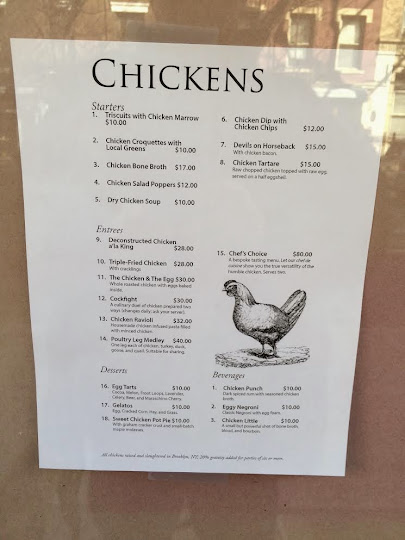 ... later we heard that this will be a quick-serve restaurant serving vegetarian sandwiches. Eater confirmed yesterday that Del Posto pastry chef Brooks Headley is opening Superiority Burger, specializing in veggie burgers and other vegetarian fare.

Headley's creations have been attracting lines wherever he has sold them, including Christmas Day from the Dirt Candy location.

The space is expected to open to the public very soon. As soon as today maybe.

Dirt Candy closed here at the end of last August to move to a larger space on Allen Street.

The space is now open as of tonight.

Previously on EV Grieve:
What the cluck? Chickens in the works for former vegetarian hotspot Dirt Candy on East 9th Street

Rumor: Vegetarian sandwich shop in the works for former Dirt Candy space
Posted by Grieve at 4:20 AM

Thanks for confirming the joke menu! Last week, I was chatting with some people and we thought it was for reals.

Crap!! I was looking forward to drinking Chicken Punch!

This is great news. Believe it or not TGI Friday's has a great black bean veggie burger with a wasabi mayo sauce. Most of the veggie burgers in this town suck. Looking forward to finally finding a great one in the EV.

i love the name. at least he has a sense of humor.