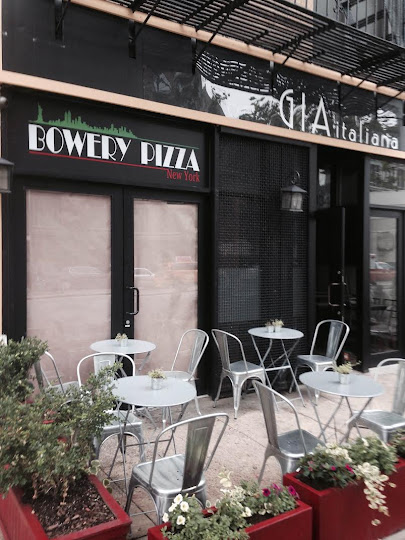 We've lost track of the comings and goings at 334 Bowery. Let's take inventory with the help of Eater and BoweryBoogie: The space between Bond and Great Jones was home to Forcella Bowery for nearly three years until last November … only to be replaced in early December by the tapas-friendly Espoleta, which closed six months later to make way for Gia Trattoria.

Meanwhile, in the adjacent space, Slice of Naples remained open even after Forcella shuttered. That was until the owners converted the space to SRO, a pizza speakeasy that debuted in January with a $38 prix fixe menu that included an appetizer, pizza, dessert and three beverage pairings, as Eater reported.

Now it appears SRO has closed as well. There's a sign up for Bowery Pizza. Perhaps this will be more of a takeout-friendly place.

The folks from SRO left this in the comments...

While it "appears' that SRO has shuttered, it is indeed still operating, and quite successfully! Due to overcrowding inside our former 12-table restaurant on the weekends, we finally decided to take over the larger dining space in the back and continue to operate as a pizza speakeasy, serving the incredible pies of our pizzaiolo, Giuio Adriani. The dining room capacity has now tripled and is much more comfortable, and our menu has also expanded — serving both the $38 pre-fixe menu, as well as pizza, appetizers, and dessert a la carte.

The new people on the bowery don't eat - just see them pushing stuff around the plate as they sit outside the Bowery Hotel. They are there to drink and be seen.

So you've eliminated the vast majority of your potential clientele off the bat. But look on a bright side - a realtor (TM) made a commission on each one of those five leases and he or she will then have spent it on liquor or drugs in the neighborhood.

This space was never on the market... as I understand it, these different ventures are from part of the previous Forcella team. Sorry — should have made that clearer in the post.

What unfortunate timing, for them. I just saw SRO featured on a local CBS news segment on Monday, and they didn't even give the address since being a spakeasy it was supposed to be a "secret." I guess it was too much of a secret. That was strike one.

Strike two: SRO barely put any sauce or toppings on their tiny little pizzas. For $38 I want sauce and toppings. And dessert and coffee. Candy and a toothpick would be nice too.

Strike three: One of SRO's pizzas is made with deep fried dough. That's not exactly what the super-skinny-jeans crowd on the Bowery are looking for. As someone else said, they don't eat, that would be too normal, they don't do normal.

I guess anyone looking for the place now will have to look for pizza almost anywhere else, It's not like we have a gourmet pizza shortage around here. What we do have a shortage of are normal places to eat. But we don't do normal around here anymore.

This appears to be the new normal for retail in our neighborhood. This current trend is not good for businesses, and not good for landlords, but the folks who trade in turnover are a new, budding sector with their own reality tv shows. I can't see this being sustainable or productive. It's like vultures seeking out the next carcass. And ya wonder why folks around here are trying to create a small business district.

What the hell is a pizza speakeasy?

I liked Slice of Naples and wish they had kept it open. Good pizza and nice staff working the counter.

334 Bowery, former long time home of Nan Goldin. Lotta shit went down there. Should be a plaque.

Dear EV Grieve,
While it "appears' that SRO has shuttered, it is indeed still operating, and quite successfully! Due to overcrowding inside our former 12-table restaurant on the weekends, we finally decided to take over the larger dining space in the back and continue to operate as a pizza speakeasy, serving the incredible pies of our pizzaiolo, Giuio Adriani. The dining room capacity has now tripled and is much more comfortable, and our menu has also expanded -- serving both the $38 pre-fixe menu, as well as pizza, appetizers, and dessert a la carte.

Also, Giovanni, our montanara fried pizza is still our number-one selling pie in spite of the "skinny-jeans crowd." If you're looking for "normal," our new slice joint Bowery Pizza is about to open... Please come by and give our pizza a try -- whether at Bowery Pizza or SRO. www.sropizza.com. (Follow our Instagram @sropizza or Facebook or Twitter if you need proof that we're still operating.)

Thank you for letting me know! I will update the post!

No problem, EVG! Please come in to try our pizzas. We'd love to have you! Thanks, Claudine/SRO
reservations@sropizza.com