There's a a vintage cookbook cook-off and potluck at Jimmy's No. 43 today 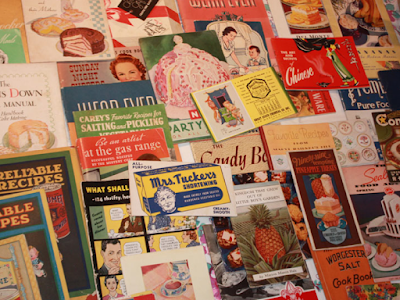 Jimmy's No. 43, 43 E. Seventh St. between Second Avenue and Cooper Square, is hosting the following event today. Via the EVG inbox…

Join us today from 1-3 p.m., where we'll be serving up dishes from recipes found in vintage cookbooks (for our purposes, we're looking at recipes prior to 1985, so not the typical stuff you can Google)!

It's in part to welcome Bonnie Slotnick Cookbooks to the neighborhood and also to continue our #EastVillageLoves campaign that we launched after the explosion in March.

Bonnie Slotnick opened her first cookbook shop in the West Village in 1997 and recently moved the business to East Second Street. Her stock in trade is out-of-print cookbooks, mainly 20th-century titles at affordable prices.

Meanwhile, Jimmy's No. 43 has debuted a new collaboration with Chef King Phojanakong of Kuma Inn and Umi Nom … resulting in Tito King’s Kitchen at Jimmy’s No. 43, which will feature Thai and Filipino street food. Read more about this at Eater.
Posted by Grieve at 7:00 AM

Email ThisBlogThis!Share to TwitterShare to FacebookShare to Pinterest
Labels: Jimmy's No. 43

Before the Bonnie Slotnick cookbook shop was occupied by her, it was "B. Strong, Inc.," which I was pretty sure stood for Bob Strong, formerly of Rescued Estates on 2nd avenue and 3rd street—now one of The Bean locations—and the Chamber of Commerce. That is to say, I thought "Bonnie Slotnick" was a pseudonym and not a real person.

How glad I am for once to have been completely wrong!