Bikes, By George! space is for rent 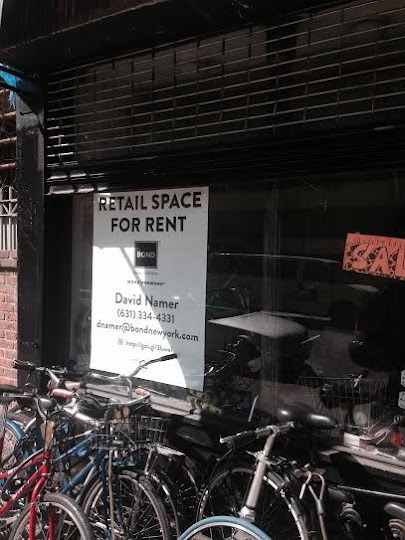 As we noted earlier last week, a rent hike is forcing George Philbert to close his bike shop at 193 E. Fourth St. at the end of the month.

Several readers have noted that the for rent sign has arrived in the storefront just east of Avenue A.

The listing at Bond, which appears to show a different business in the space, notes that a restaurant is OK for the space. The asking rent is $3,750 for 340 square feet.

After working in bike shops for 10 years, George finally opened his own place in 1980 on East 12th Street. A rent hike saw him move to his current location at 193 E. Fourth St. just east of Avenue A in 2008.

Previously on EV Grieve:
Rent hike will force Bikes, By George! to close on East 4th Street
Posted by Grieve at 4:30 AM

Email ThisBlogThis!Share to TwitterShare to FacebookShare to Pinterest
Labels: Bikes by George, for rent

This is so sad. I hope he can find another space in the neighborhood. Is that even possible, I wonder? It seems like the landlords are only looking to rent to artisanal meat shops and crap like that.

I wonder how long foodie places will stay open as well. A new business is lucky to survive the first 3 years while established businesses are lucky to survive a new lease in NYC. Small businesses are born in low rent, moderate to low income neighborhoods. The EV has been a launch pad for many and at the very least an interesting but failed attempt by most. Strangely enough small "artisanal meat shops" type of businesses are still opening despite the impossible to cover rent and other expenses. When these places fail and the line of hipster entrepreneurs vanishes we have more Subway and Dominio's to fill the gap.

George was the best, bye George and thanks for your years of great services

I've known George since the early 80s when he was on 12th Street. I was supportive of him when he moved to East Fourth Street.

A few years ago, I wanted to buy a bike for someone else. I could have gone to K-Mart for a cheap bike, but I decided to support George, a local merchant, over a shitty chain store.

I paid $200 for the bike under a handshake agreement with George that if the recipient didn't like the bike, I could trade it in for a different bike and pay more if the other bike was more expensive.

A week later, the recipient told me he didn't really like the bike I bought, as it was too small + uncomfortable. I went with him to George, where we selected another bike costing $300. I told George I was trading in the first bike and paying him $100 more for the other bike, but George told me that he would only give me $100 credit for the first bike for which I paid $200.

I reminded George that he had made an agreement with me, but he kept repeating "I'm in business" as if that meant I should just eat $100 fucking dollars!!

When I pressed the issue, George went into his shop and sicced his son on me to get me to leave. I had nothing in writing to back me up, just George's worthless handshake.

George's son was later caught in an undercover NBC sting buying what he believed was a stolen bike from a guy pretending to be a junkie. When confronted with the video (which was broadcast on tv), the son threatened and chased the crew away. In the early 90s, I caught George's son trying to sexually assault a drunken woman in a vestibule on that very same block. Recognizing him from George's on 12th Street, I chased him away.)

Whereas normally I would be upset over loosing a small bike shop such as George's, in this case, I am NOT.

i bought my very first bike as a messenger in george's 12th street place in 1987. cost me 75 bux! sorry to see him go, hope he finds somewhere else to land.

Citibike is the reason some independent bike shops have closed, including one in the West Village two years ago and now this one.
Get rid of Citibike and their ugly street hogging contraptions now more than ever!

Hey, stop mourning. I just talked to George as he was unlocking, and said he's going on vacation and when he gets back will look for a space. And I know he'll be successful, because he's that kind of Old School bike guy who can open a shop anywhere and get by.

What other decent bikes shops are in the neighborhood? Velo is the only "decent" one I can think of but is too high end for most of us. And the mechanics suck.

Yep, you need to distinguish between bike shop and bike mechanic. And George has been around long enough to know what he's doing, especially with old bikes. (Velo mechanics would look at you and laugh if you came in with a beater.) There are two mechanics that I'd go to and trust their opinions -- Hal at Bicycle Habitat and Mike at Bike Station.

Of course there is always Frank's but he hasn't touched a bearing in years.

Anonymous 7:20, Have you tried Metro Bikes on 14th Street?

The guys on Ridge St between Stanton and Rivington are nice.

CC Cyclery on e. 13th near B , formerly Continuum, as always been cool to me. Never gave me shit for my beater.

Citibike caused a West Village bike shop to close before Citibike even got started? Wow, it really is a force.