Here's the trailer for 'Ten Thousand Saints,' set in the 1980s East Village 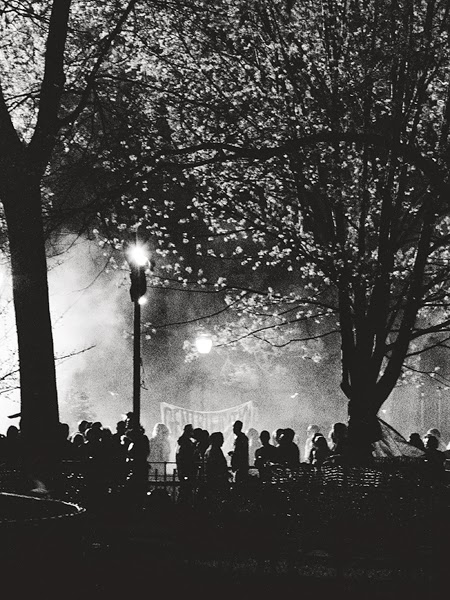 [Filming in Tompkins Square Park in May 2014 via Michael Donovan]

As you may recall, filmmakers Shari Springer Berman and Robert Pulcini filmed around the East Village in early 2014 for their low-budget adaption of the Eleanor Henderson 1980s novel "Ten Thousand Saints."

The trailer for "Saints" arrived today…

A recap today at /Film was fairly unkind about "Saints":

While the cast is impressive and the story has a lot of promise, in truth I can’t think of a film from Sundance 2015 I liked less than Ten Thousand Saints. While Hawke is charming as hell, the storytelling is labored, the hardcore scene as depicted feels put-on and phony, and the use of the Tompkins Square Park riot comes off as misguided appropriation. I don’t know if those qualities are endemic to the source novel by Eleanor Henderson, but the film may be best appreciated by hardcore fans of any of the particular cast members.

On the more positive side, Variety declared it a "warmly conceived dramedy [that] will likely resonate strongest with audiences who have a direct connection to the story’s place and time" … while The Hollywood Reporter called it "a sensitive but not overserious coming-of-age pic with a strong sense of place."

Another 'riot' in Tompkins Square Park, this time for the cameras
Posted by Grieve at 7:47 PM

I really like all the actors except Ethan Hawke! (Asa Butterfield was just astonishing in Hugo Cabret, and I have a THING for Emily Mortimer.) I'm gonna hope Variety and the Hollywood Reporter are right. (The reviews of the book weren't entirely great either.)

Gotta love that "warmly conceived dramedy," but why not "docu-dramedy"?

Ethan Hawke was really good in Boyhood, one of his best and most memorable roles yet. This almost looks like a continuation of that dad character he played but with an urban feel. With the great Emily Mortimer and Hailee Steinfeld I'm looking forward to seeing it.

Well, at least it has an R rating. Very edgy.

There they are on 6th street between 1st and A (note the DeMaria/Brant foundation building) yet the street sign says Avenue D, I believe. Gotta make it seem even edgier, I suppose.

Actually Ethan Hawke was divorced from his wife in Boyhood so it's possible he moved to NY to become an EV hipster (spoiler alert: it's movie, so anything is possible)

Gotta say: the fake CBGB storefront is sad... Next to a Chinese store? C'mon - ya gotta do better than that!