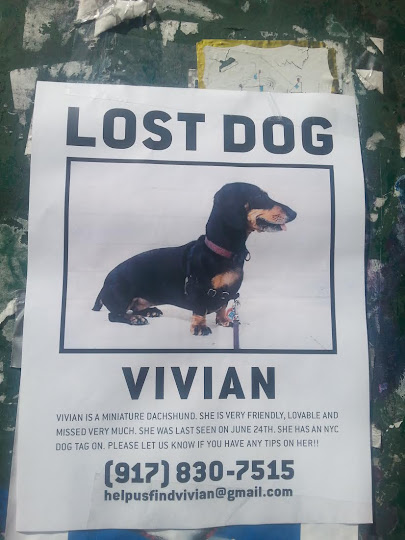 On Friday evening, several concerned readers sent along photos of flyers spotted all over the neighborhood for a missing miniature dachshund named Vivian.

Vivian is not really lost.

Turns out this is some kind of social experiment about kindness.

"I saw the dog tied up ... then I walked a block and saw the poster. I was like holy cow! So I called the number on the flyer and sent them photos of the dog and then went and waited with the dog. I was waiting a while and then a guy came over and said he was doing a social experiment with his friend on how people behave." 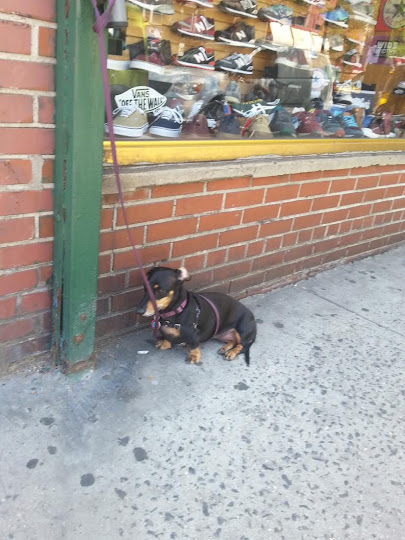 And how did the reader behave?

"I was totally stressed out and missed an appointment, waiting with the dog who was not really lost!"
Posted by Grieve at 9:56 AM

What a shitty thing to do to people. Why not just scream my child was kidnapped?!

I wonder how Vivian feels about this.

Nice way to make people skeptical of lost dog posters and wasting people's time. And what took them so long to show up once they were called? Let's hope Minivan doesn't get stolen while these idiots get distracted by their Twitter feeds, I doubt the dog enjoyed being tied up all day while they sought internet fame.

No doubt this was influenced by the media blitz that accompanied Sugar a few months ago. I think we've learned recently that Social Scientists with their research agendas aren't always the shiniest pennies.

Social experiment, my ass. This is animal abuse. They were also abusing the poor people who got worried and went looking for this poor dog. Please identify this dog's owners. We need to rescue the dog from them!

don't normally condone violence of any sort but this might be a case where the researchers deserve a punch in the face. at minimum a citation for illegally hanging flyers on public property. what total jerks.

He better hope I don't see this around the hood. My social experiment will see how much someone bleeds when I punch him in his face. And how long it takes someone else to call am ambulance.

This is some high school project level shenanigans. What is there to learn from this nonsense? Some people are compassionate about dogs, some aren't. Nice going geniuses. Real nice.

And guess whose phone number is noe going to get called at 3 am on way regular basis?

People who cry "Vivian" too often will not get help next time.

So incredibly manipulative, so thoughtlessly cruel, not to mention stupid and pretentious. Social experiment? That guy, that douchebag, is lucky if he already hasn't gotten punched in the face.

I think the reader who wrote in and had an interaction with the dog's owner should give the local police a call and report this. It is worth doing to see if the police will investigate and maybe bring in the ASPCA to investigate the welfare of this animal.

Reminds me of another social experiment I read about many years ago. College kids put a realistic-looking infant doll in a car carrier and dropped it in the center of a busy road. Just to see how drivers behaved.
Yes, it was a disaster.
Yes, the law got involved.
Yes, I think we should call that number at 3am to see how social experimenters behave when we treat them like their time and emotions are worthless.

Here are some fun "social experiment" flyer ideas for any of you creative types with some spare time on this rainy Sunday morning.

Want Some Free Drugs?
I'm going into rehab so I really dont need all this ganja and coke anymore.
Includes 2 free round trip tickets to Jamaica.
Call 917-830-7515

While I am very happy that Vivian is not really lost, I *am* sorry that her owners are a bunch of irresponsible shitheads willing to use this trusting little creature for some stupid "social experiment". What would have happened if someone had come along, cut the leash, grabbed Vivian and hotfooted it down the street faster than these bozos could catch up, and then disappeared? Would they have put up posters saying "Lost Dog Vivian, No Really, This Time We Mean It"? Jerks. This pup needs to be re-homed with someone who would be more caring and respectful of her.

Nice narcisstic "social experiment" idiots - there are many truly lost animals and you've endangered the will of people to help when actually needed. There is a poster on A about a lost cat...is she really lost or that one another fool's errand if you try to help?

And they can wrap up this ill-advised exercise by removing the signs they plastered the neighborhood with.

There is nothing good about this 'experiment.' I feel really sorry for Vivian. She actually is lost with owners like these. What idiots.

Is Liz Flock behind this?!?!

I thought Vivian was going to show up on the Poo Poo Platter at Huang's. Glad she's OK.

Irresponsible idiots should not be allowed to own pets.

Wow, that is fucked up. Calling them NOW! Mothafuckas.