Report: Superiority Burger moving into the former Odessa space on Avenue A 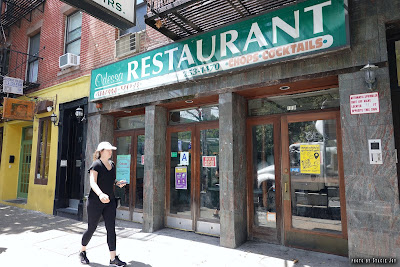 Photo yesterday by Stacie Joy
The former Odessa space at 119 Avenue A has a new tenant.
Rob Patronite and Robin Raisfeld at Grub Street report that Superiority Burger has signed a lease for the former diner between Seventh Street and St. Mark's Place.
For starters, Brooks Headley, owner of the all-vegetarian quick-serve spot, tells the outlet that he's not changing a thing:

"Odessa has always kinda been my dream space," he says. What's so dreamy about it is that besides being big, it comes completely furnished and ready to go. "It's not old and dusty and gross and needing upgrades," he says. "I find it completely beautiful — the soda counter, the satellite bar, the cash register station. I don't plan to change it at all."

Superiority will be making the short move around the corner from Ninth Street in the months ahead:

Headley says that he'll need to order some new kitchen equipment and anticipates that it will take at least five months — probably more, what with supply-chain issues — until the new Superiority opens its doors. The plan is to launch dinner service first and then open for lunch and breakfast (yes, breakfast!). He will likely surrender the ancillary kitchen space he leases on 9th Street but keep the original store for purposes yet to be determined.

In July 2020, longtime manager Dennis Vassilatos said that Odessa was shutting down after a prolonged slump in business due to the pandemic. (Odessa Restaurant opened in this space in April 1995. The original Odessa, the longtime favorite that dated to the mid-1960s, closed next door in August 2013.)
However, closer to the last day, co-owner Steve Helios told Gothamist that Odessa was only closing temporarily, that the space would be renovated. (The building's landlord is Odessa partner Mike Skulikidis.)
The space has sat untouched since then.
Earlier in the summer, Louis Skibar, whose Toloache Restaurant Group revived the classic UWS diner Old John's Luncheonette, which dates to the 1950s, was said to be eyeing Odessa.

Superiority opened in the East Village in June 2015.

Not if they change the name

They sound really nice,
hope it works out.

I was a long-time regular of Odessa and heartbroken when it closed. Of all the places that could move into the space, this seems like a good one. I never went to SB on 9th because it was too small and crowded, so now I'll give them a try.

Damn, sorry that Louis Skibar didn't make a move, I would much rather see another diner there. And what kind of breakfast is a vegan burger place going to offer???

Definitely better than a vape shop-cvs-bank. But I was hoping for diner that would be affordable for everyone.

SB is too $$$ for my budget. Not everyone in this neighborhood can afford a roll with vegetables and a thimble of sorbet for $30.

This is like best case scenario! So glad they see the value in the diner vibe, and Odessa is being kept in it's current condition! Finally some good news.

YAS I welcome our new vegetarian neighbors. Also, I have learned to enjoy the Superiority Burger logo/font with the odd word break and weird kerning, it is very clean and distinct which is really all one can ask from a logo these days.

Upper-middle Avenue A is looking good lately, font- and signage-wise. Has everyone seen East Berlin in the old Brownie's/Hi-Fi space? Now that is some 😻 signage.

Sorry I have not commented on your own font changes, Grieve! I like it now that I am used to it. 😹

Its about time. If you live on the block of ninth street the lines and loitering were at times a bit much. It's a wise decision and good for everyone.

Couldn't think of a better tenant for this space than Superiority. Excited for them to pick up a larger space.

I must be the only person who was meh about SB. Never felt the urge to go back.

Having said that, I'm glad somebody's taking the space, it will be easier to find a restaurant to backfill the 9th st space.

This is awesome! good to see a newer, newish member of the business community take over the reigns (and somewhat preserve) an important part of neighborhood history the way food is trending Odessa would have pro gone mostly Veg anyway! more changes like this please!

This is how a tough town dies. with a wimper, not a bang.

Great news! If you can't have another diner in there, I can't think of a better restaurant than SB. My only gripes with SB has always been the lines and weird hours -- it sounds like this solves both problems!

I love SB and their sides and I love the owners appreciation for style and not trying to modernize everything!

Having said that I still want diners to come back!

Granted, I'd prefer another diner over SB -- enjoy their burger when I'm up for it! just not a frequent customer -- but I'm mostly interested in how they'll make such a large space work, given their fairly specific and limited menu. Maybe it will expand?

@Sim City Mayor - No, you are not alone. I tried SB a couple of times and to this day don't get the hype. Both times my burger was burned, and fairly tasteless - I find a lot of the veggie burgers from Trader Joe's (like the Masala Chai) to be far better and a hell of a lot cheaper than these over-hyped hockey pucks.

I might be in the minority, but I would rather have another no-frills diner in that space than another niche destination. The number of diners and other cheap sit-down restaurants in Manhattan has been decreasing for years, and despite the reasonable-looking prices on Superiorty's menu, this feels like one more step down an increasingly narrow path.

The food is indeed good… but I’m with you Sim… pricey, precious and precious. Good luck hanging with the Ave A crowd.

Not so pleased about SB taking over the Odessa space. Odessa did not have the best food The eggs there were atrocious. My friends and I celebrated birthdays there because management was really cool and let us bring a cake. It was home to us . The prices were reasonable. Nothing will ever beat Odessa as a neighborhood eatery.

This is absolutely amazing. They support so many amazing farmers and small food brands who are doing food right.
The the previous comment of a “roll with vegetables and a thimble of ice cream” along with everyone who complains about prices, do you live today or 5-10 years ago? Do you support small businesses? The number of small businesses that SB is a list longer than you have probably ever seen. This country does Absolutely nothing to help small food businesses and small farms succeed. The hardships that they go through is often battered by small minded people who have no clue how food systems work. FOOD IS EXPENSIVE. we have to spend MONEY on real food that DOESNT come from a box and filled with artificial ingredients to give it a shelf life of 10 years.

This is a businesses that manages to offer quality in every single thing they offer. They have a rotating menu that is constantly challenging the diner to question their understanding of flavors. No, it’s not just a burger As those readers who’ve managed to go just once to support them.

My tip? Read, read, and maybe read a bit more. Food policy. Small businesses. Farms. Visit the farmers market. Talk to farmers. Talk to Brooks from SB. Learn and practice empathy. Close your eyes, listen. Shave off your calloused minds and feet. Understand.
To the generation who truly has nothing nice to say, guess what? The world is NOT actually out to get you. Very many of The small businesses in EV are there because they are good people.

Wow 4:09 a.m., you've set my head spinning with your wee small hours rant. A few thoughts:
1. Not everyone has to love Superiority Burger, as you obviously do. Don't preach empathy on the one hand then attack "the generation who truly has nothing nice to say." I don't even know what generation that is, but I don't like the way it's worded.
2. You seem to have some insider information about how SB spends its money. If they spend it on local, organic, low-pesticide, humane, non-industrial farms, more power to them. I recommend Cornucopia Institute for those interested in the subject of organic small farming.
3. I have nothing against SB. They are guilty only of the superior execution and marketing of some sound ideas. They rode the early vegan burger wave (maybe they helped to create it?) and continue to ride it. They keep it interesting with a small changing menu of intriguing sides and excellent sorbet. They bring a fine-dining sensibility to what is essentially fast food.
4. I don't want to set you off by saying it is overpriced, so I'll say that for me and some others here it doesn't hit the sweet spot for snack-sized portions. I like to cook so when I eat out I look for things that are different or tastier or occasionally more convenient than what I can cook at home. Obviously there are many who have a different sensibility, just as there are many who think Shake Shack is the cat's pajamas.
5. I agree that food is expensive, good food is more expensive, and it is going to cost you three or more times as much in a restaurant than it does at home. Are you saying no one should have an opinion about the cost of a restaurant, or that they should keep their opinions to themselves?
6. The restaurant business is very tough and SB has beaten the odds by creating a very successful one. Best of luck in your new location.

Their burgers are good, but loaded with too much salt.

Any SB regular knows it’s all about the sides, people, it’s the sides!


* They have some great sandwiches too

This is great news! Odessa which was once wonderful & usually packed, had been relatively empty the last few yrs before it closed. Excited for SB whose food I’ve enjoyed since it opened. I hope their efforts meet w success. They deserve it.