Thanks to Humans of New York, Mary O's will be making scones for the foreseeable future 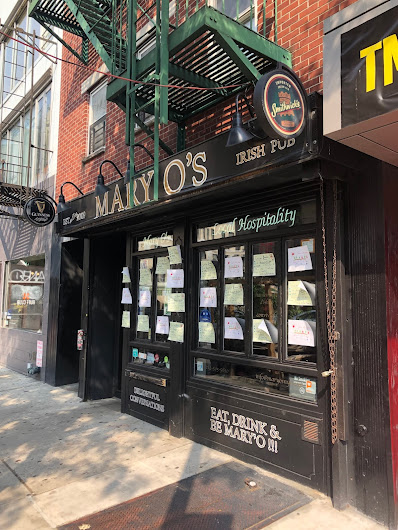 Last week, Humans of New York featured Mary O'Halloran, the proprietor of Mary O's, the 11-year-old Irish pub at 32 Avenue A between Second Street and Third Street. There's an incredible ending to this story, so allow me to bury the lead.
First, here's her story (Facebook here) courtesy of Brandon Stanton about the bar closing at the start of the pandemic in March 2020:

We got shut down two days before St. Patrick's Day. Always the biggest day for an Irish bar. My husband is a longshoreman, so he was trapped in the Aleutian Islands for nine months — no flights out. It was just me and six kids that needed homeschooling. I pulled all the furniture out of the bar, and made a section for each of them: pillow, blankets, everything they needed.

Then I had to figure out how to survive. Other bar owners were just throwing up their hands, but I had to try something. I began catering dinners for emergency workers at a nearby hotel. It wasn't much money, but it was something to do. Each night I'd cook dinner for thirty people. The kids would help when they could: peeling potatoes, washing dishes. But I'd be so exhausted every day. Everyone had so much faith in me to survive. Maybe because I keep the tough side out — everyone assumed I was OK. Nobody knew I was full of worries. But it was so freakin' hard. To keep the kids happy.
Month after month I'm falling further behind on the rent. It felt like the walls were closing in. But my regulars kept showing up. They ran errands for me. Sometimes they'd take the kids on walks to give me a break. There was a group of Irish musicians who would play here every Thursday night. They helped me set up an online store so that I could sell scones to the music people. Soda bread scones with homemade blackberry jam. My mother’s recipe from back in Ireland. Really, it's the simplest thing — but all six of us kids used to line up for them. In January a reporter named Roger Clark from NY1 came to do a story on the bar — about how I've been running it all alone, with my kids.
And that angel, he had the anchors taste a scone live on TV. It created big scone hype for a few months. It wasn’t a ton of money. I was only making $1,800 for 100 boxes of scones. It wasn't paying rent or anything. But it was something to do, you know? I finally found something that was working. People were writing notes, saying: 'I gave these to my grandmother, and she loved them.' It was the little bit of light that I needed. It pulled me forward. I didn't feel alone anymore. It was like: 'Oh My God, there's something out there.'"

Stanton followed up with a special promotion last Thursday night during her usual Irish music night — the limited edition Mary O's "HONY" Irish soda bread scones for $30. Stanton shared the link to his more than 20 million social media followers worldwide.
By the end of the night, according to an Instagram post from Stanton, they took in more than $1 million in orders for scones. He took her to a quiet table to give her an update.

She allowed herself a brief, joyful cry. Then she asked: 'I can do this, right?' I told her: 'Of course.' Because every one of those orders came from people who want the best for her. And I felt confident that we'd all be patient while she figured out a new process for making scones. Mary has a great team around her. She refers to them as ‘The Regulars’ as if they’re a squad of superheroes, but they’re actually longtime customers who transform into volunteers at a moment’s notice.
... With this support group, and her own business experience, Mary has all she needs to deliver 25,000 boxes of delicious, blackberry-jam-smothered, blessing-infused scones. It's just going to take some planning. And some time. Our goal was always to help with Mary's burdens, not add to them. She will deliver the scones as fast as she can. And things may fall into place rather quickly. 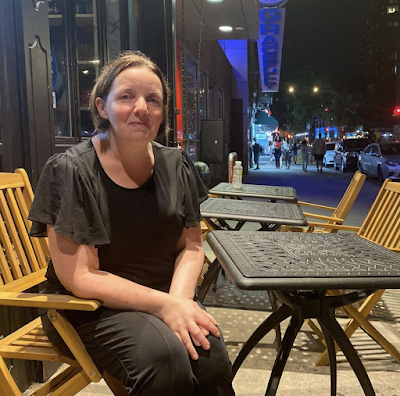 In July, a feature in his ongoing storyteller series on Dress Shoppe II owner Saroj Goyal inspired an outpouring of support for the Indian boutique on Second Avenue.
Posted by Grieve at 5:30 AM

What a wonderful story! This is community.

Mary deserves every bit of this support and recognition. She has always done so much for the community, always donating meals to local groups, hosting events and contributing in so many meaningful ways. All while raising 6 kids and running a very challenging business that has suffered like so many throughout the pandemic. But she still keeps going and her neighbors are grateful for it. She is the kind of person that would give you the shirt off her back if you needed it, so it’s amazing to see all that love come back to her during this trying time.

God bless you, Mary O'Halloran! And I raise a toast to NY1's crew and of course to Humans of New York - you did a very good deed, indeed!

I remember seeing that episode with Roger Clark and really wanted to try her scones and jam but I just can't afford them...but best of luck to her, she deserves every bit of it and more.

She is an amazing human - well deserved

Mary is family and treats all of her customers with grace, friendliness, kindness and love! 💕

I'm not crying, you're crying!!

This is the feel good story we all need these days. Mary just built herself a full blown bakery brand overnight, GO MARY O!!

hey Poco, Ace bar.. Mary can be an example for you on how to be an asset and a beloved business to our community and not a drunken blight hated by most local residents

I remember Mary from our village in the west of Ireland. She is a great human and deserves this. Each scone delivered will be done so with love.

I agree!!!! Also, those scones are f%$king AMAZING.