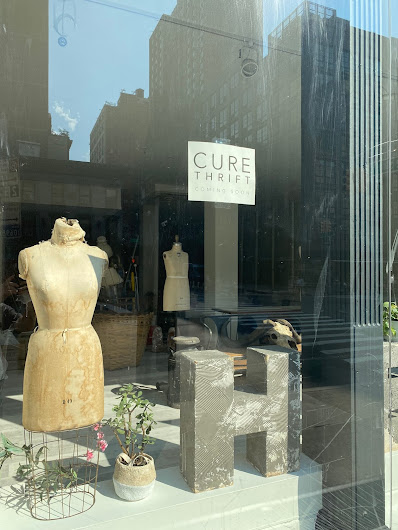 As we first reported back on May 3, Cure Thrift Shop was moving to the northeast corner of Third Avenue and 12th Street.
The owners have been getting the larger space ready for an opening, which, according to the Cure Instagram account, could happen as soon as Aug. 28. 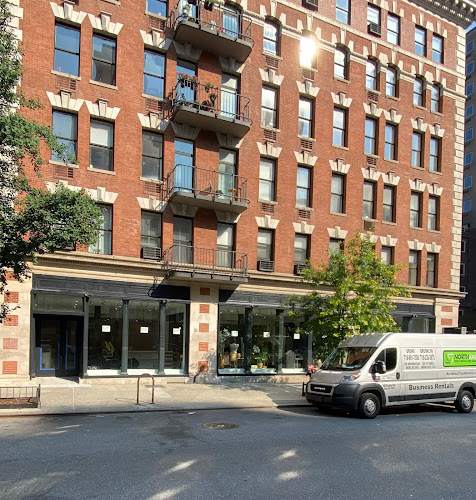 Cure, the eclectic nonprofit that benefits juvenile diabetes research and advocacy, closed its previous location at 111 E. 12th St. between Third Avenue and Fourth Avenue in early July.
As previously reported, Basics Plus was set to close in this storefront — 91 Third Ave. — in the spring of 2019. However, the housewares shop that opened here in August 2014 ended up consolidating the space, and making do with a smaller footprint in the building.
Thanks to Steven for the photos earlier this month!
Posted by Grieve at 5:16 AM

Unlike the late lamented Salvation Army Thrift on 4th Ave., Cure is a bit high end both in merchandise and price. But their stuff is always well presented & the staff is friendly. I've shopped (and bought) many times at the 11th St. shop & am very happy to have them now on 3rd Ave. I will NOT miss that step-down floor at 11th St. that despite warning signs & flashing lights caught me off-guard many times. Nor the funky staircase into the lower level. I bought my beautiful Library Chair there & there's a long tale about "wooden cherries" for another time. (Old Timer Nostalgia Moment - I still miss Surprise!)

Agree with @hywel dad, I really miss that Salvation Army. Great place to bring donations to. And yes I know about Goodwill on 14th Street, but I just preferred the grittier SA space.

Agree with you, really miss the Salvation Army on 4th Avenue. Imagine a lot of people do because it was usually busy. Goodwill just does not have the same quality and is higher priced. The Cure is too high priced for those who need to shop in a true thrift store.