Rakka Cafe has not been open lately 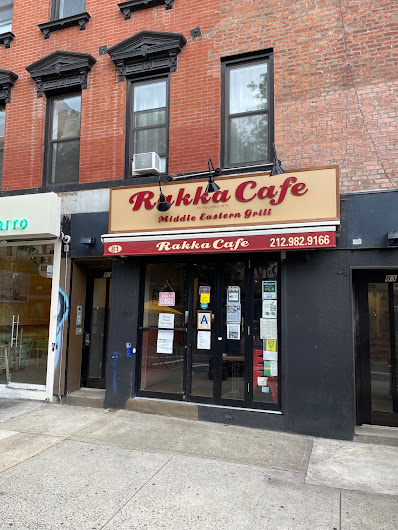 Some regulars are concerned about Rakka Cafe, which has not been open for the past five weeks here at 81 St. Mark's Place at First Avenue.
There isn't any signage noting a temporary closure on the front door. The quick-serve Middle Eastern restaurant's website is still active ... while the phone goes unanswered.
According to a listing at Loopnet, this space has been on the rental market since August 2020 (with an update last Wednesday).
If this is the end, then they've had a helluva run. The current signage says established in 1978. (The previous signage stated 1982!) The space underwent a renovation and name switcheroo from Cafe Rakka to Rakka Cafe in 2013.
Cafe Rakka's Avenue B outpost closed in late 2013.
Yesterday, we noted that Rakka Cafe's neighbors at 83 St. Mark's Place and 135 First Ave. — Stromboli and Dan & John's Wings — were closed due to a gas issue in the building. We're told that there's a separate line for this address.
H/T Steven!
Posted by Grieve at 5:10 AM

I hope they make it! Love Rakka, and I miss all the other little falafel joints that were once dotted around the area. It's one of the last of its kind.

Oh no! The best falafel around!

I loved their fries

That is definitely not the best falafel, take it from a middle east native.
The place is nice, and I hope they reopen, but let's not fly here with the falafel compliments .

Agree!! Incredible flavors and delicious falafels every time we go!

"Gas line issues" forced us out of that building after living there for 10 years. The landlords are scum.