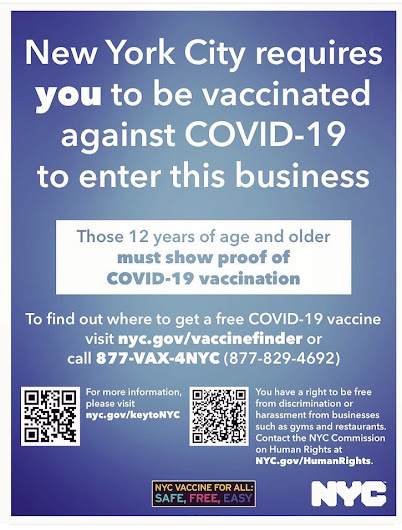 As you likely know, starting yesterday, people age 12 and older need to show proof of a COVID-19 vaccination — at least one dose — to dine or drink inside NYC restaurants, cafes, bars ... or go to movie theaters, museums, concert halls, gyms, art galleries and other venues such as bowling alleys and pool halls.
In addition, employees of those businesses must also be vaccinated, "with holdouts facing the possibility of being fired if they refuse," per The Associated Press.
Mayor de Blasio announced the vaccination mandate — aka Key to NYC — two weeks ago as a way to persuade more people to get vaccinated as the Delta variant has prompted a resurgence of the pandemic in some areas. (Since his announcement, the mayors of San Francisco and New Orleans have announced similar mandates, Bloomberg reports.)
According to the city, proof of vaccination may include:
• NYC COVID Safe App
• Excelsior Pass
• CDC Vaccination Card (or photo)
• NYC Vaccination Record
• An official immunization record from outside NYC or the U.S.
Find more details at the city site here.
Businesses have until Sept. 13 to comply with the mandate ... before city agencies will start conducting inspections and issuing fines up to $5,000 for repeat violations. Gothamist has a nice explainer here. (And yes, if you're dining outside, you can use the restrooms.)
Meanwhile, the Associated Press and the Post both had articles on the complications of the measures, "as restaurant servers, bartenders and ticket agents become the frontline enforcers for vaccination rules."
Patrons who either aren't vaccinated or don't have their proof may dine outdoors at restaurants.
Several East Village restaurants started requiring proof of vaccination earlier this month. The owners of Ruffian, the wine bar at 125 E. Seventh St. between Avenue A and First Avenue, and Kindred, 342 E. Sixth St. just west of First Avenue, suspended indoor dining until further notice. Their outdoor spaces remain in service.
According to city data, 56 percent of all adult New Yorkers have been fully vaccinated; the number is 68 percent in Manhattan — and even higher in the 10002, 10003 and 10009 zip codes.
Posted by Grieve at 6:00 AM

Except the "outdoors" that many of these places have somehow been allowed to build on the street are even more claustrophobically inside, than the inside!

I am fully vaccinated with Pfizer and have recently returned to work in a restaurant on a part time basis nearby after taking a five year break where I spent over eleven years in the trenches of Manhattan's restaurant industry as a waiter and bartender. As someone who is immunocompromised but stable and who is working closely in tandem with the public again, this is a safety measure for FOH and BOH staff, including customers who are also vaccinated because of the Delta variant. I understand from the perspective of a business owner whom might be afraid of turning others away who don't have the vaccine, but it really it is a public health issue. I really get it. They don't want to lose customers or money. We all have been through a lot since March of 2020. Many of whom lost money and hope. We have had to endure quite a bit and have had to comply with constantly changing mandates, which can be frustrating. Here's the thing. Why are some owners bitching about how long it will take to check someone's vaccination at the front door? It takes a second or two. It's not a big deal. Obviously, everyone has the right to not have the vaccination. That is their choice, even though I fail to understand it given the 53k people who died in NYC let alone the 623k people in the US. But, businesses now have their right to turn others away as well. It works both ways. We have never experienced anything like this ever in our lives. I truly hope there is not too much opposition or potential violence for this critical new measure. My boss is following through with this. She says that the health and well being of her employees and clientele are the most important. And if people don't want to show their vaccination status or are unvaccinated, they can't go inside. Plain and simple. She doesn't want to lose business, but she is passionate about public health and safety. Perhaps this will incentivize others who are fearful or reluctant to get their inoculations as they are free and ubiquitous at most drugstores. Then, they can go anywhere they want.

Everyone has the right not to visit here or travel here for business.

I have a few neighbors who are anti-maskers, who go to anti-vaccine and anti-mandate rallies, and to mask burning events. They are still convinced this is all a government plot to exert some kind of mind control, or that Covid isn’t that bad, that their own immune systems are strong, or that the vaccine is dangerous. No amount of information or debate seems to change their minds.

Now that they wont be able to get into their favorite restaurants, I am sure more of these people get vaccinated, because its all about their own self interest. They will no doubt hold their protest rallies outside of these restaurants at first, but over time they will have no choice if they want to return to their normal lifestyles. Until then they can sit outside in a plywood shelter in the rain, wind, heat and cold while the rest of us enjoy civilized life.

In my opinion, this is more about incentivizing people to get vaccinated by denying them certain privileges. If it was only about prevention, then it would have applied to stores, barber shops, nail salons etc. But since unvaccinated people can still enter those establishments without proof or even masks(depending on the establishment), it's all about depriving people of what they may want to do. I'm not saying there is anything wrong with that, just simply the logical conclusion

@11:22am: Well said, and I'm glad the owner of the restaurant where you work is a person of integrity who genuinely cares about the health of her staff AND of her customers. That is the way forward and out of this mess.

IMO, those people who don't want to get vaccinated can go suck lemons, b/c their reasons are BS.

I'm disgusted by the number of maskless people in the streets and indoors—including public transportation—who just "forget" their masks or who honestly think that as soon as they're vaccinated they can just lose the mask. (I have tons of photos of maskless people in my Instagram—along with other stuff—if you're curious.)

I'm particularly disgusted by the "dicknosing" people who let their nose hang out of their masks—basically saying, "My comfort is more important to me than your survival."

I have respiratory issues—verified by the WTC Health Program because I was below Canal Street shortly after 9/11 and for several months thereafter—and I still wear a mask.

You write >> "maskless people in the streets".