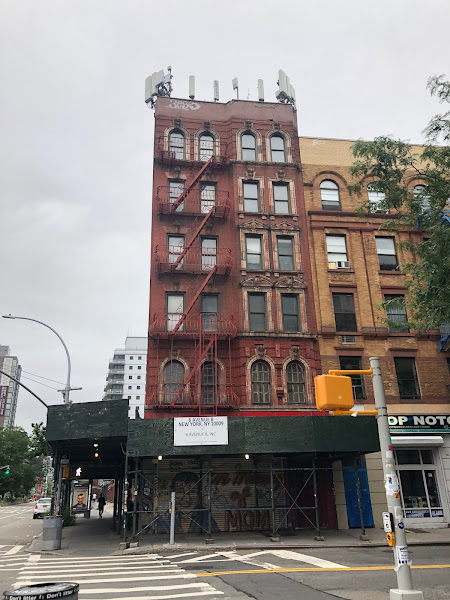 We've been talking about the RUMORED new development coming to the now-empty single row of businesses at 250 E. Houston St. between Avenue A and Avenue B.
There was some speculation that the long-vacant 6 Avenue B on the NW corner might be part of a new residential project.
A little digging in public records (courtesy of Upper West Sider — thank you!) reveals that work has been filed in recent months to upgrade antennas and add new FDNY access signs at No. 6. Seems doubtful, as Upper West Side noted, that AT&T would spend the money to upgrade the equipment if the building was about to be demolished.
As for No. 6 ...  the liquor store in the retail space has been closed since the owner passed away in the fall of 2009 at age 89. (Chico created the tribute to her on the gate in February 2010.)
In January 2013, workers were spotted hauling out some junk from the building...  in December 2014, bricks fell from the building, breaking the foot of a passerby, as the Lo-Down reported at the time. And an SUV took out part of the sidewalk bridge in November 2018. And that's about it.
And as previously noted, this is one of the abandoned buildings owned by the estate of the mysterious team of Arthur and Abraham Blasof, now both deceased.
Updated 10:30 a.m.
Thanks to the commenter who did a little digging in the archives. There was a question about the windowless lot line at 6 Avenue B. Here's a tax photo dated 1939-1941 showing a building identified as 2-4 Avenue B (with a Circulating Library storefront!) ... that corner structure was likely demolished when the city widened East Houston... and No. 6 became the new corner building... 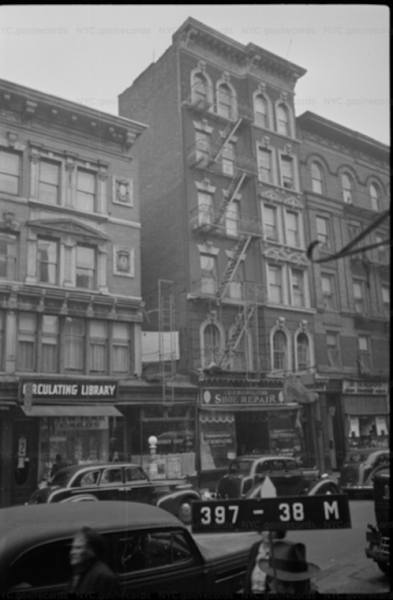 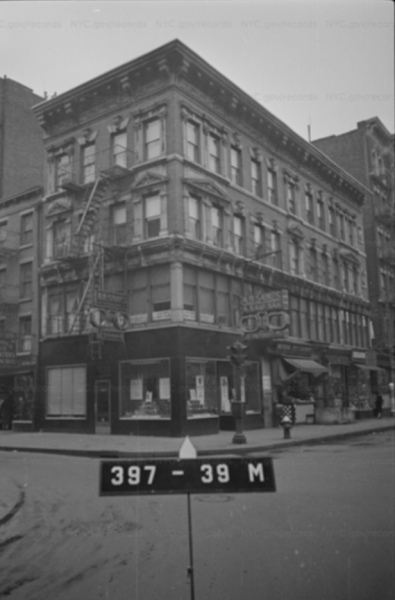 To answer a previous poster's question, a little Tax Photo digging – 6 Ave. B was indeed next door to a large building that looks to have been demolished with the Houston widening (once that was a much narrower street). You can see #6 all the way at the edge of the photo, which is why the windowless lotline wall persists today:

Similar situation to the many 'orphaned' buildings along 6th Avenue where the subway line was cut in the 1930s.

You mean oculist. The occultist is very Great Grimoire.

Cool scafolding! I particularly like the 2 varying heights. Minimalist light usage and spacing. Considerate design at its best.

Very cool old images! It is so offensive to me that the city allows buildings to stay vacant like this so long. Force the owner to do something or sell!

What a shame to lose that beautiful corner building. Both buildings are architectural beauties. I'd like to know how Houston, Allen and Chrystie Streets looked before the street-widening.

Then there was Delancey before the SPURA fiasco. Does anyone have a time machine?

Does anyone know who currently owns/maintains it? I've wanted to photograph the interiors for a long time but have never been able to figure out who to contact.

Thanks for the digging @10:28, that was my question yesterday and I'm glad to learn how to investigate myself in the future!

You mean oculist. The occultist is very Great Grimoire.

I was looking and looking for an "occultist" sign!

What a shame to lose that beautiful corner building. Both buildings are architectural beauties. I'd like to know how Houston, Allen and Chrystie Streets looked before the street-widening.

You can get a taste of that if you go west of 6th avenue, where Houston street is a narrow street.

Does anyone know who currently owns/maintains it? I've wanted to photograph the interiors for a long time but have never been able to figure out who to contact.

If you really hunger to see the inside of a dumbbell tenement, you can get a taste of that at the Lower East Side Tenement Museum at 97 Orchard Street; although that building is a pre-law tenement, you can get a feel for what that building is like inside—six floors, four units per floor. The old-law tenements were an improvement—but not much—over the pre-law in that they had enhanced airshafts to improve ventilation.

At the Tenement Museum they'll even explain what a "TB window" was—a feature of pre-law but not Old Law tenements.