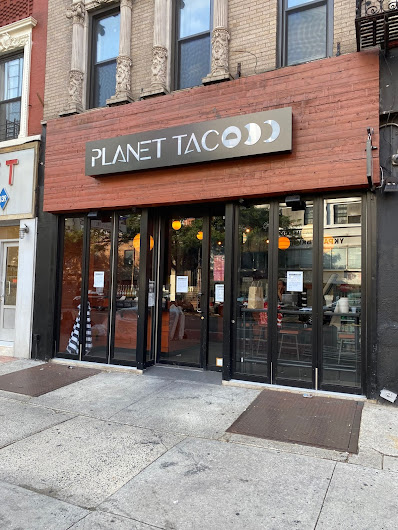 After a nearly two-month closure, Planet Taco reopens today.
Per the door signage, "we are all systems go." 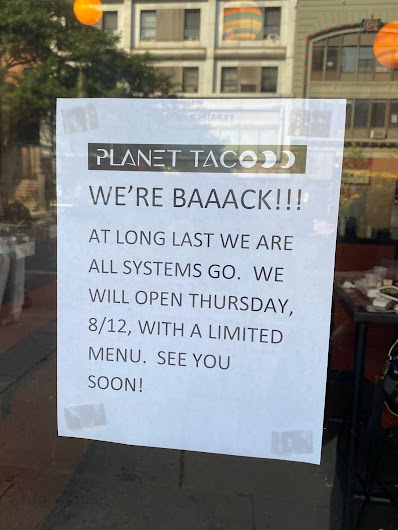 As noted last week, an unspecified utility in the building here at 141 Second Ave. between St. Mark's Place and Ninth Street had kept the newish quick-serve taco shop out of action. (Planet Taco debuted in March; the temporary closure started in mid-June.)
The reopening signage also notes that they will be offering a limited menu for now — which may not be a bad thing as even fans of the place said that the extensive offerings can be overwhelming.
Not sure what the new hours will be: they were previously open from 11 a.m. to 10 p.m.
Thanks to Steven for the photos!
Posted by Grieve at 5:03 AM

Fantastic, was afraid they perma-temp closed

Great news! Excellent food, and good people. I live nearby, and our building had to endure about 6 months without gas service. It really can get dicey in these old East Village buildings. Welcome back, Planet Taco!

Does anyone know how this place compares to Dos Toros? I'm a huge fan of the carnitas burrito at D.T.'s and would love to find a place that tops them.

@ Chippy. Um, Planet Taco is more of a traditional/authentic mexican spot that for some reason chose to venture into other cultures as part of its menu offering as a means of differentiating themselves from other taco joints in the neighborhood. But their mexican offerings are legitimate. I don't think those options will stick around and they will stick to their roots of offering traditional tacos and burritos.

Dos Toros is just another version of Chipotle and no where close to authentic. Completely different.